Now that the lava flow is entering the ocean at Kapoho Bay, a team of researchers is using autonomous ocean robots, an unmanned technology, to capture live ocean data close to the entry area.

Researchers from the University of Hawai‘i at Hilo have been hard at work collecting data at the current Kīlauea eruption on Hawai‘i Island. As the lava continues to flow, UH Hilo professors, scientists and students are providing valuable expertise and resources on multiple fronts, helping government officials assess the hazards to the public and decide where and how to respond.

Now that the lava is entering the ocean at Kapoho Bay, a team of researchers from UH Hilo, Massachusetts Institute of Technology, and the U.S. Geological Survey’s Hawaiian Volcano Observatory, are using autonomous ocean robots, an unmanned technology, to capture live ocean data close to the entry area. With technology called Wave Gliders, scientists have the rare opportunity to study the effects of the lava entering the ocean, the plume it creates, and the interactions of the lava and seawater directly from the surface of the ocean. Scientists note that very few volcanic eruptions and lava flows have ever been monitored in real time from the ocean.

“The plume of hot, sediment-laden water generated by the lava flowing into the ocean spreads out, impacting surrounding ecosystems and permitted boaters operating in the area,” says UH Hilo geologist Steve Colbert. “We don’t know how far and how deep that plume extends, or how it changes with oceanographic conditions or changes in the flow of lava. The Wave Gliders provide us the opportunity to answer these important questions.”

“The effect of this massive lava flow entering the ocean is dramatic and amazing, but at the same time somewhat mysterious” says Roger Hine, chief technology officer and co-founder of Liquid Robotics, the manufacturer of the ocean robots. “Detailed measurements of the ocean plume and the ecosystems it impacts are now possible and safe to obtain with unmanned systems like our Wave Gliders. This is an opportunity of a lifetime to deploy our ocean robots to help advance science.”

By using an unmanned ocean robot vs. sending a research ship, researchers can collect scientific data on this rare volcanic event without risk to humans. The surface water temperatures where the lava is entering the ocean is measuring above 120F/49C, creating conditions dangerous for humans but less so for ocean robots. 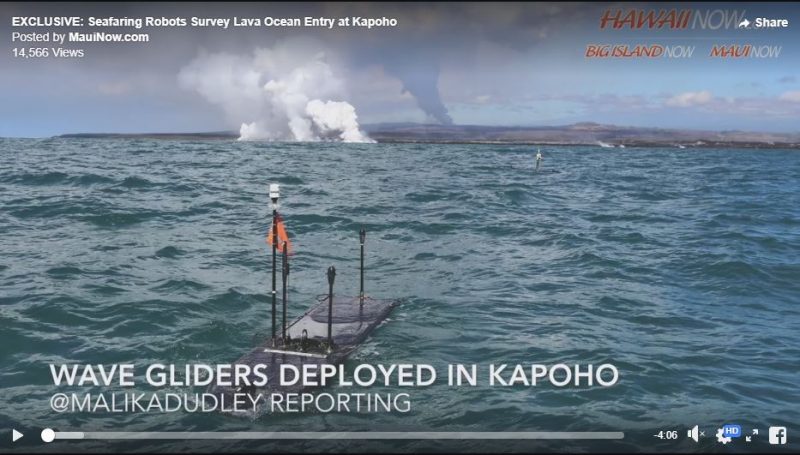