Students from the Maunakea Scholars program competed to win observation time on telescopes.

The Maunakea Scholars program has expanded to Molokaʻi for the first time. Students from Molokaʻi High School will have access to this advanced technology, astronomy outreach and professional development opportunities in science, technology, engineering and math careers.

“Iʻve never been to Maunakea or the Big Island and I am pretty excited for that because I have never done anything like this before,” says Molokaʻi High School sophomore Skylar Rain Kuahuia. “So itʻs a great experience for me.” 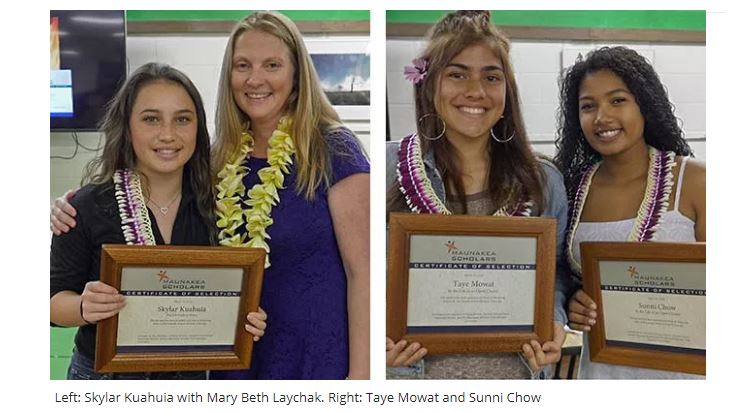 Since its inception in 2015, the Maunakea Scholars program has seen tremendous growth and engagement across the state, doubling each year in size. This year, with the inclusion of more public schools like Molokaʻi High School, more students are benefitting from the educational empowerment of the program and the world-class telescopes.

“It’s exciting, especially coming from Molokaʻi,” says Molokaʻi High School junior Taye Mowat. ”We don’t get that much opportunities like that over here because we are so small.”

“We chose Omega Centauri to study and we wanted to study where in its lifespan it was, like, right now,” says Molokaʻi High School junior Sunni Chow.

As of spring 2018, hundreds of local high school students from 10 public schools have participated in the Maunakea Scholars program. Just days before the winners from Molokaʻi were announced, eight students from Waiākea High School in Hilo were awarded viewing time, following award ceremonies at Kapolei, Kalani and Honokaʻa High Schools.

“Getting time up there is like a once in a lifetime opportunity, especially because we are the only people who even get the opportunity to even go up there, so it is a really special thing for me,” says Alena Soares, Waiākea High School senior and Maunakea Scholar mentor.

Once telescope time has been awarded, the students have the opportunity to visit the telescopes at the science reserve atop Maunakea for an in-depth look at the science and technology taking place. The students will also visit the Canada-France-Hawaiʻi Telescope’s Waimea headquarters for a night of remote observing in the telescope control room, watching data stream live from the summit to computer systems in Waimea.

The Maunakea Scholars program’s partnership with the Hawaiʻi Department of Education and the University of Hawaiʻi have helped Maunakea Scholars grow beyond the immediate geographic proximity that had limited participation in the first years of the program.

Mary Beth Laychak, outreach manager for CFHT explains, “It’s such a privilege to honor these students’ hard work with awards at the midpoint of their research trajectory with this year’s Maunakea Scholars cohort. As we expand statewide, it’s critical that we include communities like this one—full of brilliant minds that deserve a shot at the world’s most powerful telescopes.”