Emil DeAndreis tracks his path from a healthy professional baseball hopeful to his battle with rheumatoid arthritis. 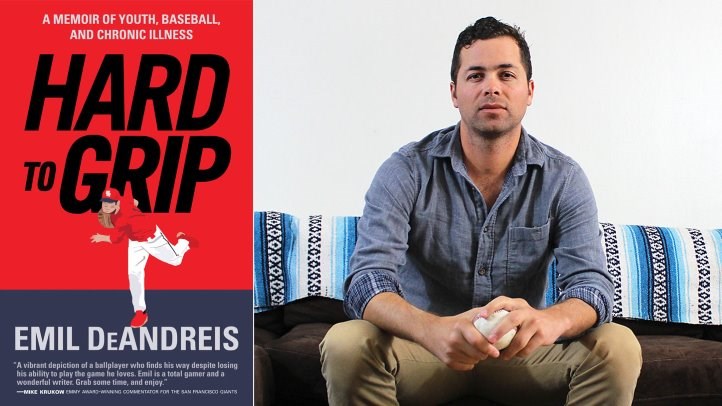 Armed with English and communication degrees from the University of Hawai‘i at Hilo, alumnus Emil DeAndreis, who pitched for the Vulcans from 2005-2008, has released a book, Hard to Grip, that has become a popular read among Major League Baseball players and many others. The author tracks his path from a healthy professional baseball hopeful to his battle with rheumatoid arthritis. He’s now an author of two books and an English instructor at the College of San Mateo in California.

The San Francisco native will be in Hilo next week for two book signings—on Sept. 2, 2017, tentatively set to start at 2:00 p.m at Basically Books in Hilo, and Sept. 5 at 11:30 a.m. in Campus Center room 301 at UH Hilo (campus map). Note: Please be advised 9/2’s Basically Books event has been cancelled (the books will not arrive in time). Remaining event Tuesday at UHHilo still scheduled for 12:00 in CC301.

The book has received positive press this summer, named as one of the “Top 25 Books of the Summer” by Honolulu Magazine.

HARD TO GRIP
by Emil DeAndreis

Baseball season is perfect for this wonderfully candid and often hilarious tale of a UH Hilo baseball pitcher, whose meager talent is offset by a prodigious appetite for carousing. DeAndreis shows a major league gift for portraits that light up the heart: his blue-collar parents, his girlfriend (now wife) from the Deep South and “Dr. P,” his writing teacher and adviser, who doesn’t let his talented student off the hook for bad decisions.

Former MLB pitcher and author himself, Dirk Hayhurst says, “Hard to Grip is the genuine article: A baseball story about a player and his traumatic, insane, hilarious and completely relatable love of the game—and how fragile that love is.”

DeAndreis had an average college baseball career (2-2, 5.43 ERA) but a YouTube video of the left-hander’s bullpen session garnered professional interest from a team in Belgium.

“I was diagnosed with rheumatoid arthritis in that same month, and I never signed the contract, or threw a pitch in professional baseball,” he says.

Looks like leaving UH Hilo with the two degrees in hand was a good back up plan.