Examining the ambitious life and tragic death of Japanese immigrant and Honoka‘a hero Katsu Goto, UH Hilo’s Patsy Iwasaki takes on the role of executive producer of a documentary film set in the late 19th century.

Patsy Iwasaki, a lecturer in communication and English at the University of Hawai‘i at Hilo, is bringing to life the legacy of Japanese immigrant Katsu Goto. Iwasaki, a media advocate using filmmaking to “heal, impact and inspire diverse audiences to promote peace and equity,” is executive producer of the documentary film, Honoka‘a Hero: The Story of Katsu Goto, and she has big ambitions for the project.

“I want to take this to the next level, get national interest,” she says.

The story of Katsu Goto has its roots beginning in 1885, when, at the age of 23, he traveled to Hawai‘i to be a laborer on a sugar plantation in Hāmākua, Hawai‘i Island. When his contract was completed, he forged a path to become a local businessman and leader in the small Japanese community in the town of Honoka‘a, where he opened his own retail store while also fighting for the rights of his fellow community members working as plantation laborers.

But his business success and selfless service ultimately led to a tragic end—on October 29, 1889, Goto was found hanging from a telephone pole, lynched in Honoka‘a town.

Today, 127 years later, the story is being brought back to life with the help of modern technology and the vision of Iwasaki. Watch video for background on the story and film:

Aside from teaching at UH Hilo for eight years and putting together this historic documentary, Iwasaki is also working toward her doctorate in learning design and technology at the UH Mānoa College of Education Learning Design and Technology program. Her dissertation will be on a design study on the Goto project.

She was inspired to research the story of this little known Japanese immigrant after being the first to receive an award from the Goto of Hiroshima Foundation. Iwasaki was granted funding to travel to Japan in 1993, and her journey began.

That was the year the Goto of Hiroshima Foundation was formed by Fumiko Kaya, Goto’s adopted niece, who was born in Honoka‘a and raised in Japan. The late Kaya (d. 2004) was a medical doctor, rare for the time and place she grew up in, and she was also a survivor of the atomic bomb that decimated Hiroshima during World War II.

After 15 years, the Goto Foundation brought formal closure to the Japan component of the program, and in 2007 Iwasaki, along with two other fund recipients, were invited back to Japan to attend a closing ceremony. Although the Japan component closed, the foundation continues to award annual scholarships to UH students via the UH Foundation.

The Goto foundation provided funding to support distribution of a graphic novel about Goto’s life written by Iwasaki and manga style illustrator Avery Berido entitled, Hamakua Hero: A True Plantation Story (Bess Press, 2010). Manga is a distinct Japanese style of graphics developed in the late 19th century. The work was displayed at the Bishop Museum along with artifacts and a video, which was produced by Iwasaki and directed and edited by filmmaker Danny Miller (director of the documentary). See cover and a page from the book, and video, below.

Discover the story of Katsu Goto, a plantation worker and labor leader who was lynched in Honoka‘a, Hawai‘i in 1889 as told through intimate interviews with his descendants, academic and historical scholars and community members. This 60-minute film will use dramatic re-enactments, historical photos and beautiful footage filmed in Hawaii, Japan and other location in the United States to bring this tragic and inspiring story to life.

“It is important for current and future generations to know about the history and people who helped shape the society that we live in today,” says Iwasaki.

Iwasaki enlisted the help of Jackie Pualani Johnson, professor of drama, and a crew of students, recent graduates and community members. Johnson has been with UH Hilo for 37 years and has worn many hats in that time, including serving as performing arts department chair, writing and directing various productions, acting and teaching.

Johnson says that her interest was piqued when she saw a trailer that Iwasaki produced with Miller as a preview for the documentary.

“When I saw the quality that they were striving to achieve, I immediately wanted to be a part of it,” says Johnson.

Iwasaki and crew had already begun filming interviews in 2014 and, with Johnson’s help, began filming reenactment scenes in 2016. This past year they have had approximately 40 actors and production members collaborate with them on the project.

An emphasis is being placed on production authenticity and quality.

“Scene reenactment is providing an applied learning experience for everyone involved,” explains Iwasaki. “There is a real attempt to make everything in line with what actually happened.”

In fact, they use actual court documents to reenact the trial scenes.

The group has gone to four different filming locations, and there are a total of five planned. Filming locations have included the Church of the Holy Apostles, Heart Ranch, Sweet Cane Café, Kona Historical Society’s H.N. Greenwell Store, and Uchida Coffee Farm.

Kimo Apaka is a UH Hilo alumnus who received his bachelors of arts in theater and had his directorial debut at the UH Hilo Performing Arts Center with the story Conquering the Sun. Apaka hails from Hilo and plays the role of Goto in the documentary’s reenactment scenes.

“I feel very honored to be able to portray such an important historical figure to the Japanese community in Hawai‘i,” he says. “[Katsu Goto] represents courage, progress and honor and his story continues to inspire those who are exposed to his tale including myself.”

The final day of filming will be a more intimate moment with Apaka as Goto performing solo.

Another alumnus, Hoapili Mossman, graduated from UH Hilo in spring 2016 and plays the part of a Hawaiian plantation worker in the film.

After receiving his degree in performing arts (drama), Mossman was interested in being involved with the production. A major part of his involvement is due to his respect for Johnson and her ability to facilitate student collaboration with the local acting community.

“It’s a Hawaiian story about immigration in Hawai‘i, and I like to [be a part of] more things that involve my ancestors and how they lived,” says Mossman. “I would like to have that on my résumé more than westernized productions, to show my diversity and cultural appreciation.”

Of the experience thus far he says, “It has been really fun, it’s cool hanging out with other community actors and working under the tutelage of Jackie Johnson.”

Darrell Gabonia, an actor with the production team, graduated from the Academy of Art University in San Francisco with a degree in motion picture and television.

“Jackie asked me, and I said yes,” he says. “I wasn’t familiar with the project or the story but Jackie was casting it and that’s all I needed to know. Being a film maker I’m usually part of the crew, so it’s fantastic being a part of the cast, where there is a lot of downtime and you can just have fun with everyone.”

Lawrence Mano is currently enrolled at Hawai‘i Community College in Hilo and has been undecided on his future career path. However, being an actor in many productions including the Goto documentary, and also dancing with Great Leaps for five years, has been instrumental in his choice to pursue theater and dance.

He says, “Being involved with the performing arts departments at UH Hilo and Hawai‘i Community College has definitely helped me push over into the arts.” 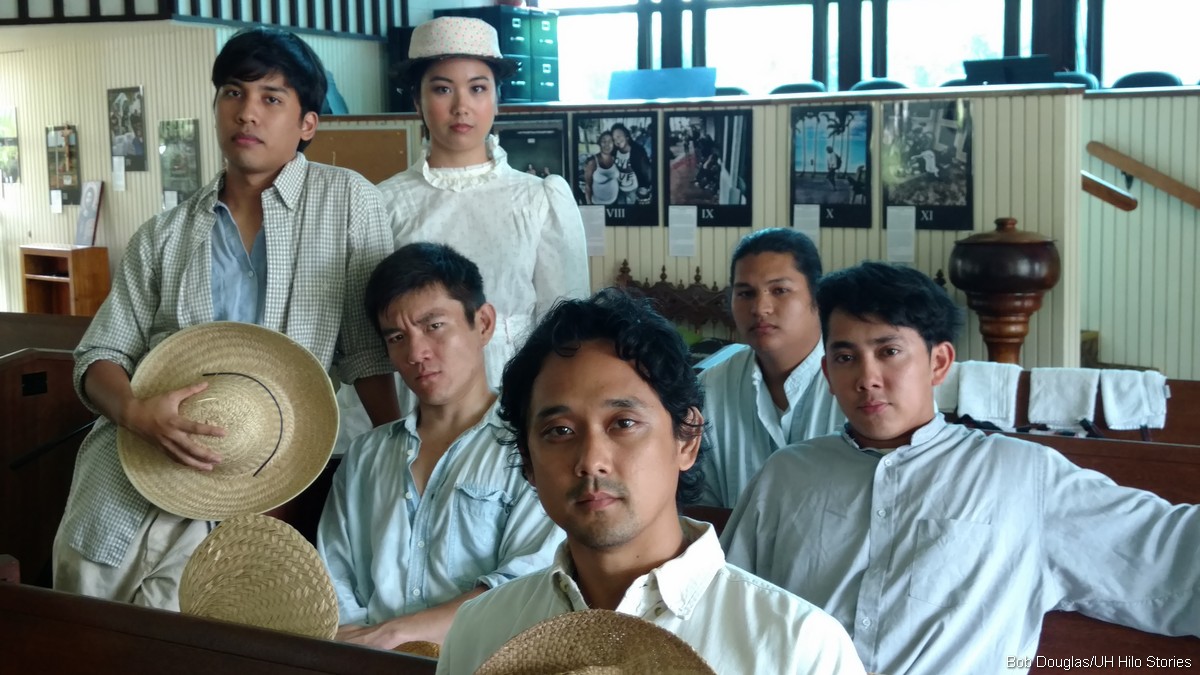 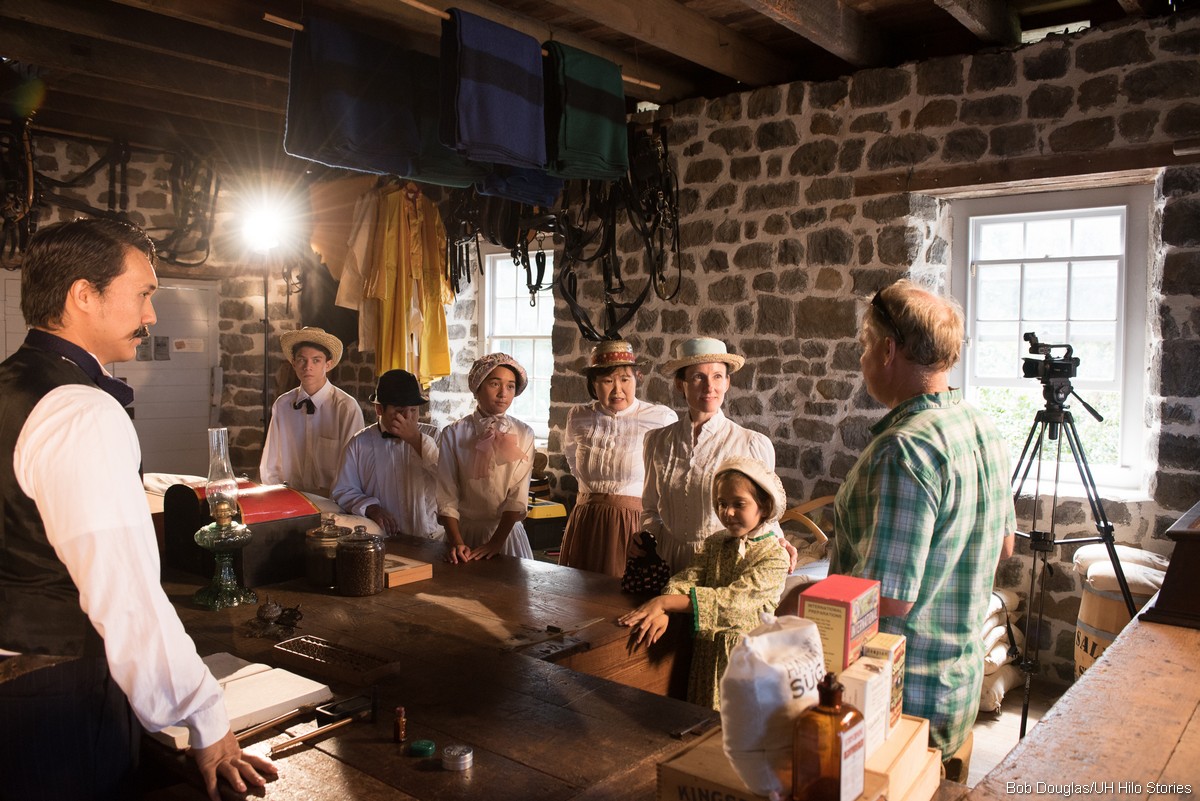 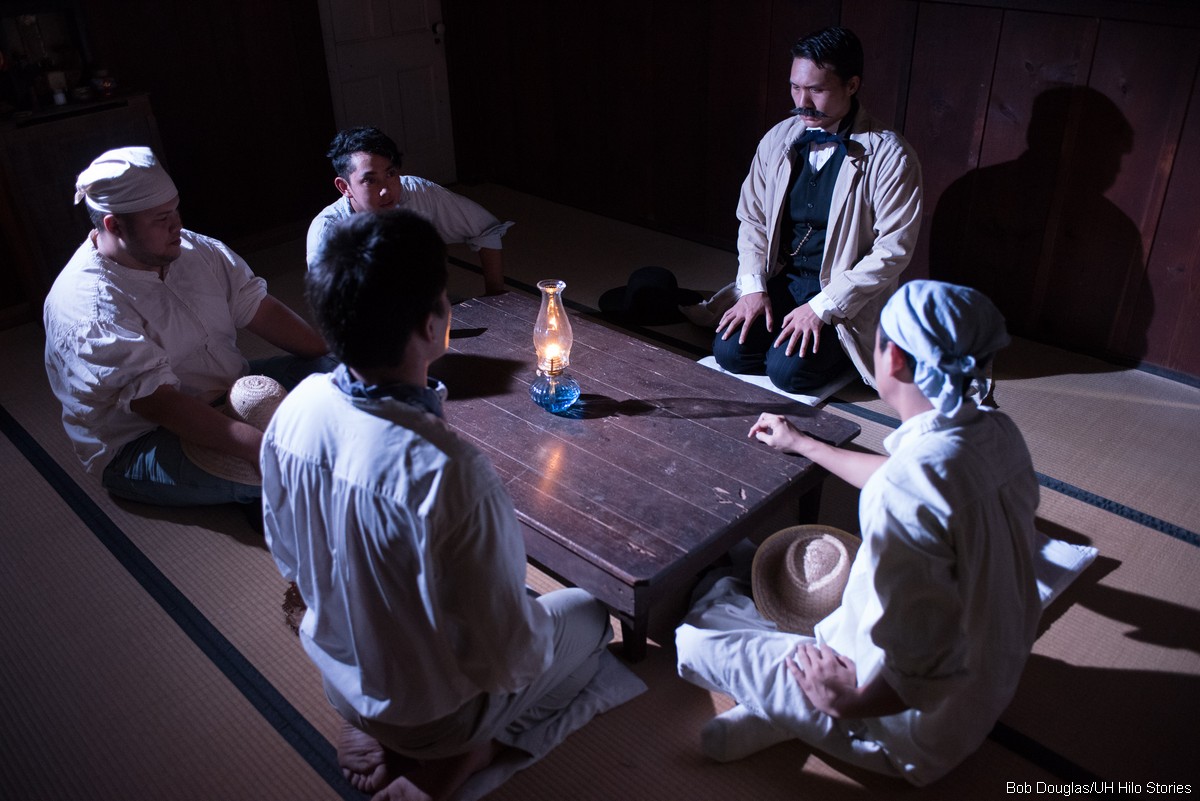 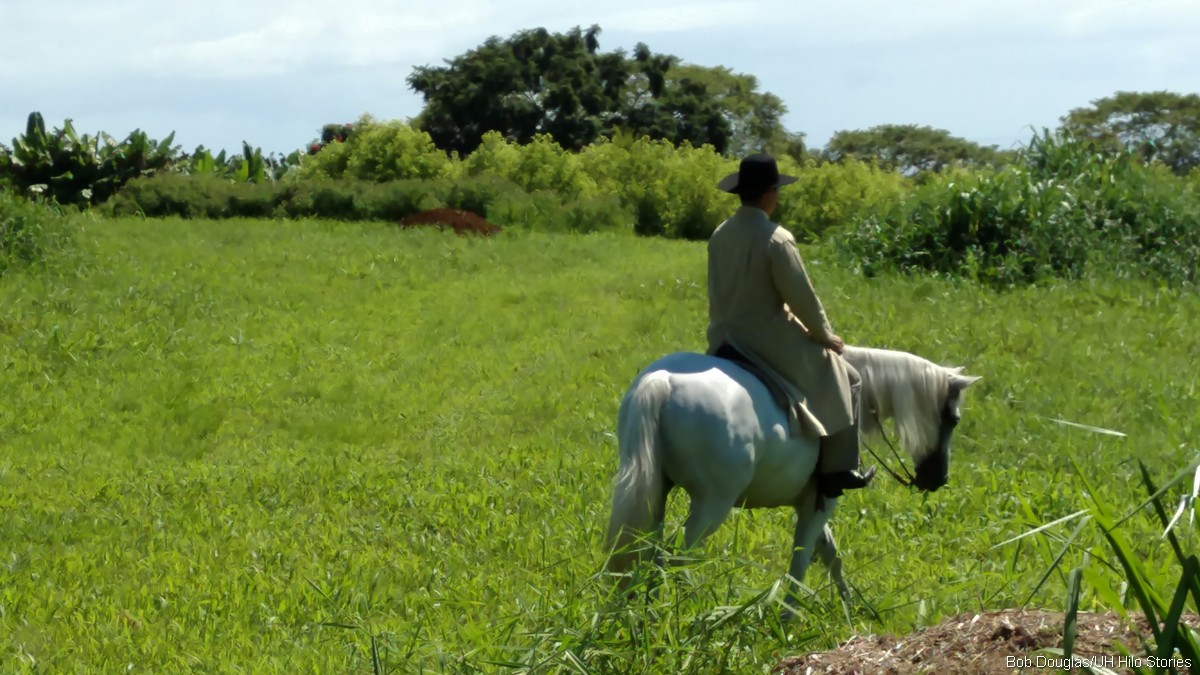 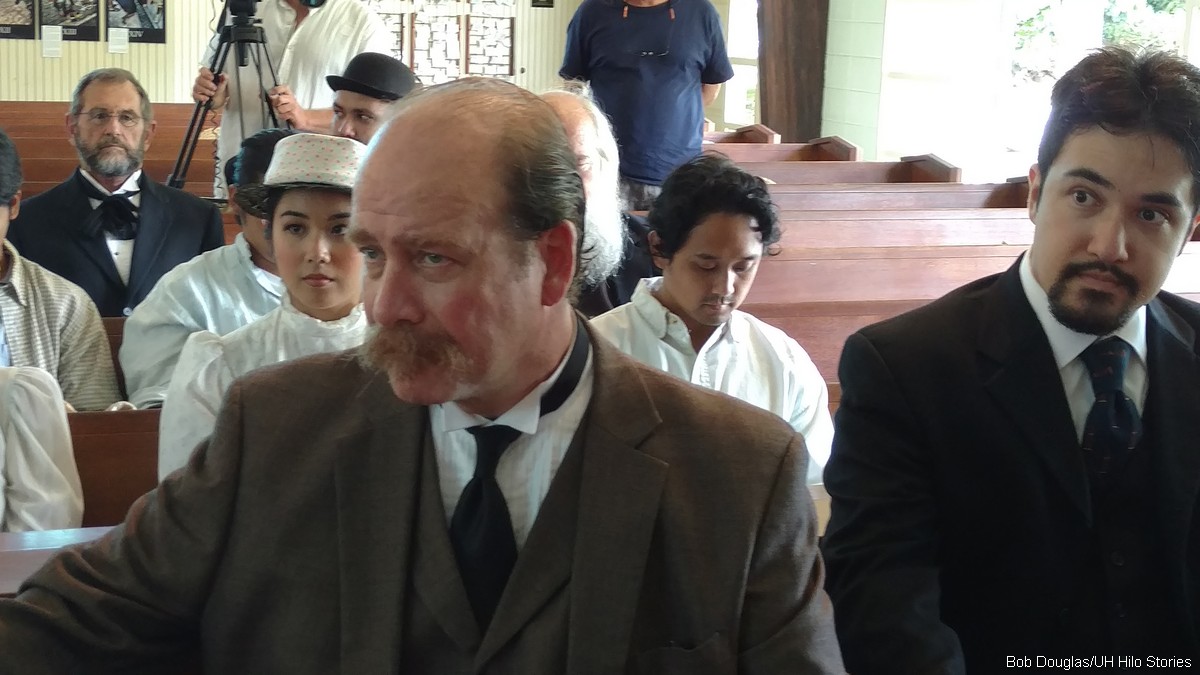 On Facebook: Bringing the Legacy of Katsu Goto to Life.

About the author of this story: Lara Hughes (senior, business administration) is a public information intern in the Office of the Chancellor.

About the photographer: Bob Douglas is a local artist, photographer, and student who volunteers his photography skills to the Office of the Chancellor and UH Hilo Stories.