This the second regional honor for the University of Hawai‘i at Hilo sophomore. 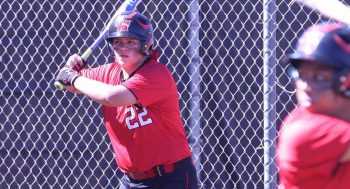 This the second regional honor for the University of Hawai‘i at Hilo sophomore. Early this month, she was announced as a first-team 2016 National Fastpitch Coaches Association Division II all-Region designated player. She was also a second-team all-PacWest utility selection and UH Hilo’s Female Student-Athlete of the Year.

Gaspar batted .415 in 49 games with nine doubles, six homeruns and 36 RBI. But it was in the Pacific West Conference that she did the most damage where she led the conference with a .506 batting average and .807 slugging percentage. The AIB College of Business (IA) transfer was also second in on base percentage (.581), third in hits (42), fourth in RBI (31), fifth in homeruns (6), second in walks (18) and second in sacrifice flies (3).

Gaspar was selected PacWest Newcomer of the Week in February.

Even with arrival of the coronavirus disruption and development of a “new normal,” UH Hilo had an immensely successful 2019-2020 academic year, filled with accomplishments, accolades, milestones, and celebrations! Highlights in the university’s 2019-2020 Annual Report.