The acronym CyberCANOE stands for “Cyber Enabled Collaboration Analysis Navigation and Observation Environment,” a display technology that enables users from varied disciplines at different campuses in the UH System to work together on projects.

A scientific visualization data class at the University of Hawai‘i at Hilo held demonstrations of their course projects last Thursday at the university’s ‘Imiloa Astronomy Center. The course is using collaborative display technology and software tools that enable users from science to education to the arts, local or distributed elsewhere, to work together.

On Thursday, nine teams of faculty and students in multidisciplinary fields—marine science, computer science, art, and creative media—from UH Hilo and UH Mānoa, shared their projects in an event free and open to the public.

It was a wonderful opportunity to experience the students’ work and talk to them and their faculty.

This past January, the CyberCANOE system was installed at the UH Hilo ‘Imiloa Astronomy Center, becoming the first tech system of its kind on Hawai‘i Island (see video at right). The acronym CyberCANOE stands for “Cyber Enabled Collaboration Analysis Navigation and Observation Environment.” CyberCANOE enables users from varied disciplines and locations to work together and communicate with each other on collaborative projects. It is the brainchild of UH Mānoa Professor of Computer Science Jason Leigh of the Laboratory for Advanced Visualization and Applications or LAVA.

The CyberCANOE at ‘Imiloa is funded by the Academy for Creative Media System, based at UH Mānoa under founder and director Chris Lee, as part of ACM’s support for the 10-campus UH System. The ACM System is dedicated to fostering collaboration between campuses and disciplines, and the new CyberCANOE at ‘Imiloa now unites UH Mānoa and UH West O‘ahu with UH Hilo, bringing together science with art, design and story telling.

According to creator Leigh, “This class is changing things around in a way that takes advantage of how arts are traditionally taught, encouraging students to put their projects out for open criticism to work and problem solve.”

Cheng adds, “Computer science students have a great opportunity to work on real world data with marine science students and with art students that can enable all to discover patterns and tell interesting stories, bridging the gap between scientific research and the public.”

Art professor Goebel says class projects allow each discipline to contribute their expertise in solving a visualization problem. Being able to see things one does not normally see is one of the things that ‘Imiloa really does very effectively, such as visualizing outer space inside the planetarium dome. Scientists are dealing with information, and sometimes they need creative means, and that is where the artists come in. “That’s what we do, we think visually,” says Goebel.

Leigh notes, “Most problems we have to solve in the world today are not just about the one diagram that gives you the Nobel Prize but a number of different factors, different pictures that have to come together like a jigsaw puzzle. You can think of the CyberCANOE as this giant palette or canvas where you put up pieces of information, and by moving them around next to each other you form the secret hidden inside the data.”

The sky is the limit

The CyberCANOEs being built in Hawai‘i all have varying capabilities. For example, some of them have stereoscopic 3D or tracking. This type of technology can scan historical sites as part of preservation measures, so that centuries from now people can still visit those places even though the site might be long gone.

“The technology is accessible to all,” says Leigh. “Wheelchair bound individuals can enjoy technologies like Virtual Reality (or) VR. Some may consider VR an isolating experience but if done right, it can actually be very rewarding. Imagine putting a 3D camera on the International Space Station, or the Moon, or on Mars. Very few of us will ever have the opportunity to go there, but with VR technology, you can.”

Burns and the Department of Marine Science at UH Hilo also are doing 3D modeling and 360 video for reef sites from Hawai‘i allowing people to be immersed in a location without having to be there.

Burns points out this is especially beneficial for people wanting to experience restricted sites like the Papahānaumokuākea National Monument. Observers can look at data, but also virtually experience the physical environment from the scale of reefs throughout the globe, all the way down to a molecular level, transcending spatial scales and giving people a huge amount of information in a concise product.

More photos from the demonstration day, click to enlarge 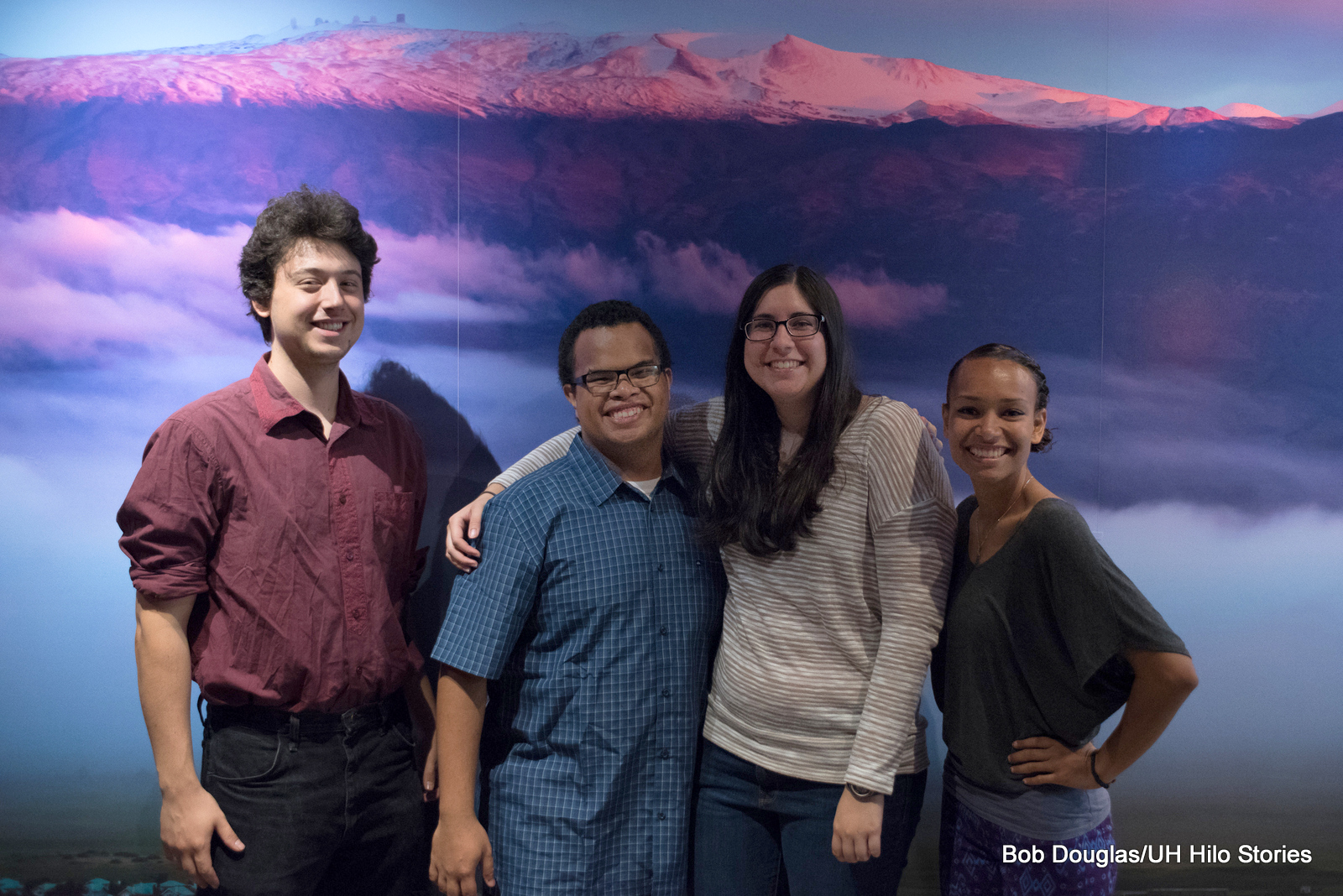 Adventures in Wai ʻŌpae: Visit one of the most beautiful coral reefs in the Big Island

Diving into Water Quality: What happens to a reef when water conditions change?

The Adventures of Keiki Koʻa: A baby polyp learns from a wise coral

Racing the Reef: Dodge danger and race your reef! A quick game to show some of what affects reef growth

Attack on Algae: Save the corals by cleaning up algae with a supersucker!

Roi Roundup: Hunt down a top invasive fish species in the reefs of Hawai‘i

Northwestern Islands: Explore the uniqueness of the Northwestern Hawaiian Islands and their reefs

The Game of Coral Life: What are the chances of different corals to make it to the end?

Adapted from a media release and other sources.

About the photographer: Bob Douglas is a local artist, photographer, and sometimes part-time student who volunteers his photography skills to the Office of the Chancellor and UH Hilo Stories.