Researchers at the bioacoustics lab at the University of Hawai‘i at Hilo are quickly making great strides in advancing the field of ecology. The lab was established just last year by Patrick Hart, professor of biology, along with UH Hilo colleagues Donald Price, also a professor of biology, and Adam Pack, an associate professor of psychology who specializes in marine mammal behavior. Already the research and technology being developed at the lab are making a big impact.

The lab goes by the Hawaiian name LOHE, which means “to perceive with the ear” and is an acronym for Listening Observatory for Hawaiian Ecosystems. The facility is made possible through a Centers of Research Excellence in Science and Technology (CREST) grant awarded by the National Science Foundation and is currently home to several research projects.

“We’re using sound in lots of different aspects of ecology,” explains Hart about the mission behind the lab and the research being conducted there. “We’re trying to use sound to better understand the distribution and abundance of animals and how the richness of their vocal repertoire changes with population size and across the landscape.”

In fact, many of the studies are focused on just that and one of the goals of the lab is to document the vocalizations of native Hawaiian species to have as a reference for the future.

“We are basically trying to create a library of native Hawaiian animal sounds,” says Hart.

A new and innovative algorithm

A new algorithm developed by a researcher at the LOHE lab—to identify the song of specific bird species—boasts efficiency and limitless potential for science.

A recent study undertaken by a research team at the lab, “Bioacoustics for Species Management: Two Case Studies with a Hawaiian Forest Bird”—findings published in the journal Ecology and Evolution—used the new algorithm to automatically detect native ‘amakihi bird songs out of the cacophony of sounds in the forest. The algorithm was written and developed by principal investigator Esther Sebastián-González, who is doing post-doctoral work at UH Hilo. Hart is co-principal investigator along with Joshua Pang-Ching and Jomar M. Barbosa from the Department of Global Ecology at the Carnegie Institution for Science, Stanford, Calif.

With the new algorithm tool, the researchers found a high success rate in identification.

With the new algorithm, detection of particular bird songs is much faster, more efficient, and highly accurate—and it’s easy to use. As in the case of the ‘amakihi study, Sebastián-González and her team used the algorithm to confirm the existence of the ‘amakihi, a common honeycreeper, in certain areas where species confirmation was previously unknown. She explains, “It took us one day instead of a couple of weeks.”

Sebastián-González says that with a few adjustments, the algorithm can be tailored to detect any animal species. With the information and codes for the algorithm available online, “Everyone can use it,” she says.

Sebastián-González, who received her doctor of philosophy in ecology in Spain and did post-doctoral work in Brazil at Sao Paulo University and in California at Stanford University before coming to UH Hilo, says, “My main goal in coming here was to work with the bioacoustics lab.” It’s easy to see why— she’s just developed a tool that has the potential of revolutionizing ecology research.

Two other researchers utilizing the LOHE lab are Nicole Fernandez and Ann Tanimoto.

Fernandez is a second year graduate student in the tropical conservation biology and environmental science program at UH Hilo and is working with Hart. She is studying how isolation and habitat affect native Hawaiian ʻōmaʻo birds and their songs. She received her bachelor of science in natural resources and environmental management, with a concentration in wildlife, from UH Mānoa.

Tanimoto completed her thesis on the ‘alalā, also known as the Hawaiian crow, and has received her master of science in tropical conservation biology and environmental science from UH Hilo. She works with Hart at the bioacoustics lab, furthering her studies on the ‘alalā. She also is assisting Sebastián-González with the automatic detection of different Hawaiian birds. She is currently working on five different studies.

The ‘alalā is now extinct in the wild and found only in captivity. They are currently being successfully bred in captivity for future release. The sites of the two breeding programs are the Keauhou Bird Conservation Center in Volcano on Hawai‘i Island, and the Maui Bird Conservation Center on Maui—both are field stations under the management of the San Diego Zoo Institute for Conservation Research on behalf of a partnership with the U.S. Fish and Wildlife Service and the State of Hawai‘i Division of Forestry and Wildlife.

“The ‘alalā are extremely intelligent and have an amazing variation of vocalizations in their repertoire,” says Tanimoto.

The scientists explain that a large part of a bird’s brain is devoted to the production and interpretation of sound. Hart says, “We know that vocal communication is an important part of their behavior, but it’s really not understood very well and there have been few studies done on Hawaiian birds.”

He goes on to point out that this is why Sebastián-González’s work is so important. “We have literally thousands of hours of recordings with many different birds calling out at the same time, but we might be interested in one species,” he explains. Trying to categorize, define and organize this much information can be very time consuming and costly.

The researchers agree that one of the most interesting finds made possible by the founding of the lab has been with the ‘apapane on Hawai‘i Island. ‘Apapane has shown great dispersion and vocal diversity from one kīpuka (verdant area surrounded by lava) to another. It would be like going from one section of a small town and speaking with a different accent or dialect and then driving to yet another part of town and speaking differently there as well.

Sebastián-González has been able to document over 200 syllables used by the ‘apapane, in a relatively small area, where most birds usually have a total repertoire of far fewer syllables. 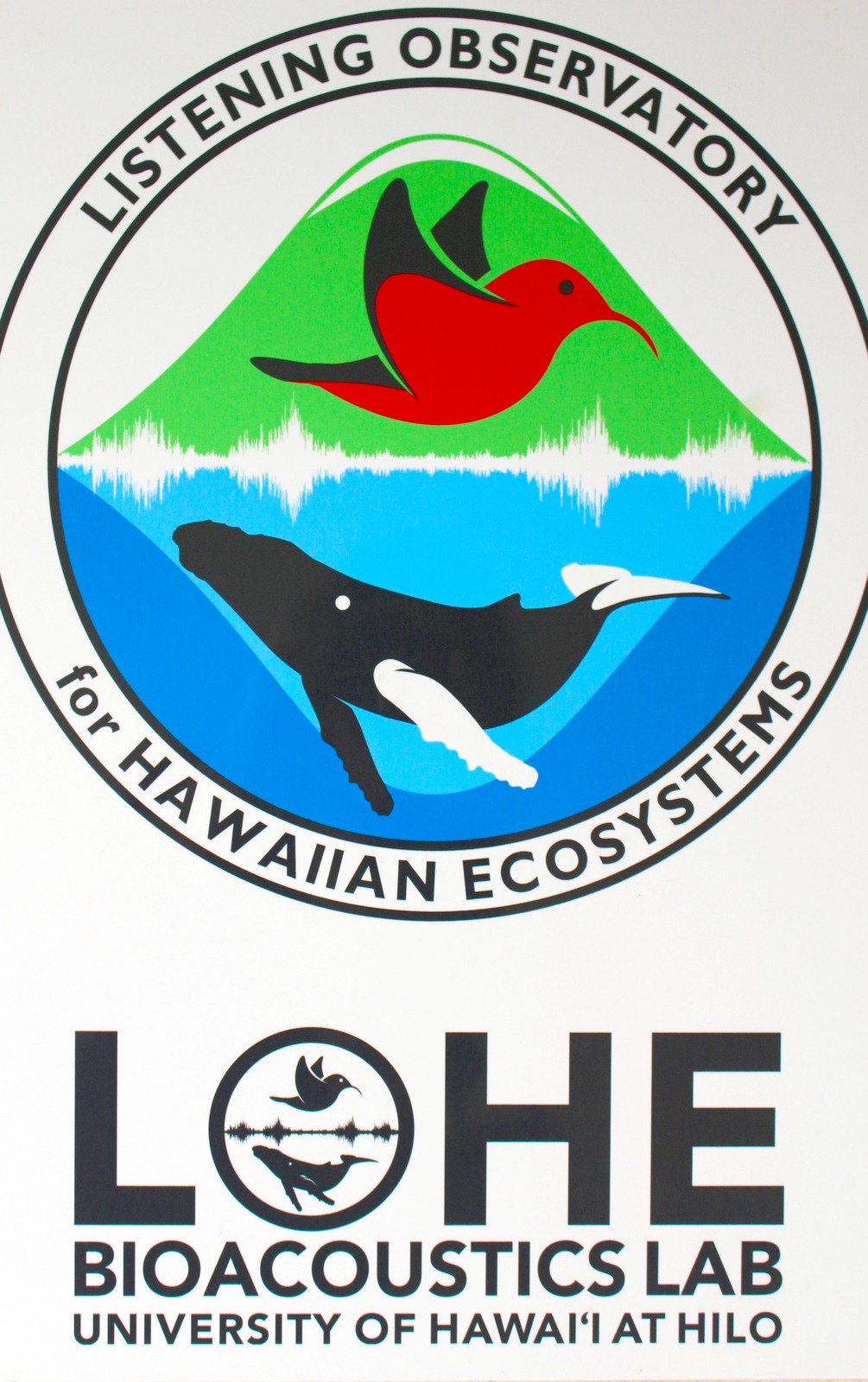 The researchers at the acoustics lab also are involved with community outreach, attending Earth Day fairs and educating children and the community about the environment and the different opportunities available in the field of ecology.

The lab team has given talks at the Lyman Museum, the recent Hawai‘i Conservation Conference hosted at UH Hilo, and the Friends of Hakalau National Wildlife Refuge.

As far as future plans go, Hart says, “We will continue making recordings, documenting the variability and answering all of the many different questions that we have.”

Hart hopes that the lab can one day become self-sustaining through various grants and even gain contracts to do work monitoring animal species such as whales and other types of birds. The researchers are currently writing a proposal for a new grant and hoping to branch out to the neighbor islands, expanding the native species documentation.

About the author of this story: Lara Hughes is a junior at UH Hilo majoring in business administration. She is a public information intern in the Office of the Chancellor.