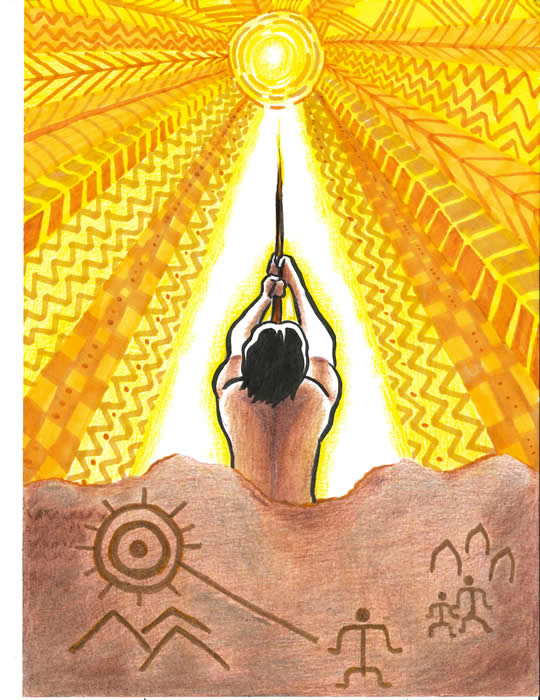 Kimo Apaka, a University of Hawai‘i at Hilo alumnus from the performing arts program, will have his directorial debut with Conquering the Sun, a story weaving together several Hawaiian myths to be performed at the UH Hilo Performing Arts Center November 14-16.

Apaka has performed in several plays at UH Hilo and while a student at the university, starred in a series of creative promotional videos for the Summer Session (one particularly cute one highlighting the astronomy program can be viewed here). He also plays ukulele and speaks conversational Hawaiian.

In his directorial debut, Apaka’s Conquering the Sun tells the story of Maui’s next feat, to stop the Sun Goddess Lā from moving so quickly across the sky. His mother, Hina, complains that her kapa for the lūʻau will not dry because the days are so short. With the help of his sister, Keahi, and others they meet along the way, Maui climbs to the top of the mountain and lassoes Lā with a rope made of their hair. Lā finally agrees to slow down, allowing the days to be longer in the summer and shorter in the winter.

From Colorado to Hawai‘i

Conquering the Sun is a story with an interesting history. It was originally one of three plays done by the touring theatre group, The Colorado Caravan, a master’s degree program at the University of Colorado at Boulder in the mid-1970s through the early 1980s, of which Jackie Pualani Johnson, UH Hilo professor of drama, was a member.

“In 1976, Conquering the Sun was the touring show for elementary-aged children,” explains Johnson. “Fools and Buffoons from Shakespeare was the middle-school show, and two Chekov one-act plays were done for adult audiences. I joined five other actors, three men and three women total, on the 1976 tour.”

All three scripts were generated and performed by the group as they toured Colorado and Wyoming for six months, performing at schools, community centers, prisons, and other venues while staying in the homes of community sponsors. Each performance was done in a theatre-in-the-round set up, which afforded a close proximity to the audience. Sometimes they performed for groups of 30 to 50, other times, the audience numbered several hundred.

“I’ve been at UH Hilo for 35 years, using my Colorado Caravan training on a daily basis in my acting endeavors,” Johnson says. “The Colorado Caravan was a great training ground for us, as we hoped to become teachers in school, college, and community settings. We honed the performance skills necessary for the plays and acquired workshop techniques that allowed us to connect with audiences post-performance. After the finale of each show, we segued into classrooms and gathering areas to guide audience members in exploring their creativity and working on developmental goals such as expressiveness, improvisation, movement, vocal production, (and) story-building.”

The show was done in Hilo in the early 1980’s for Summer Parks and Recreation Programs. The Hilo Community Players allowed Johnson to form a touring theatre troupe called Hawai‘i Theatre Huaka‘i and the performers took Conquering the Sun to gymnasiums for hundreds of children in the summer program.

Passing a story to the next generation

And now, the baton is passed from teacher to (former) student. The current UH Hilo production of Conquering the Sun is directed by twenty-something Apaka, who studied under Johnson while an undergraduate at UH Hilo and was one of her assistant directors for Miss Saigon last spring. He is a graduate of Kamehameha Schools and Johnson says he is “the ideal person to bring the project to our stage.”

“He has shaped the show into a proscenium-style presentation so that it can be on the main stage at the Performing Arts Center,” she says about Apaka altering the spatial configuration, a director’s prerogative. Rather than the original configuration of the performance, with audiences encircling the acting area (theatre-in-the-round), Apaka’s Conquering the Sun is done on the stage with the audience viewing from the front, as if looking into a picture frame. That picture frame is the proscenium.  “Even further,” she explains, “Conquering the Sun actually breaks the proscenium, because the platforms on the stage jut out beyond the proscenium to get closer to the audience.”

“Additionally,” Johnson says, “he has added a bit more Hawaiian Language to the script since the play was written before the language renaissance was in full swing. Words we commonly hear every day now help to anchor the play in our host culture.”

The story helps audiences remember that working together is often more effective than working alone, and that helping others can be more profitable than just helping yourself. As was done in the 1970s and 1980s on the mainland, the message will reach school children who are scheduled to see the show at UH Hilo. Apaka’s story shows sibling rivalries and compromise come into play between Maui and Keahi, the sister in this version who wants to lead the effort to slow the sun. Johnson says it makes for a very accessible story for young audiences, complete with a message for them to take home and discuss with their siblings.

Show dates are Friday and Saturday, November 14 and 15 at 7:00 p.m., and Sunday, November 16, at 2:00 p.m. at the UH Hilo Performing Arts Center. Tickets are reserved seating and priced at $12 General, $7 Discount and $5 for UH Hilo and Hawai‘i Community College students with a valid student ID and children up to age 17, and are available by calling the UH Hilo Box Office at 932-7490 or ordering online at artscenter.uhh.hawaii.edu. If purchased as part of the UH Hilo Performing Arts Department Trifecta package (three performances for $15) tickets are $5 General/Discount and slightly over $3 for students with a valid ID.