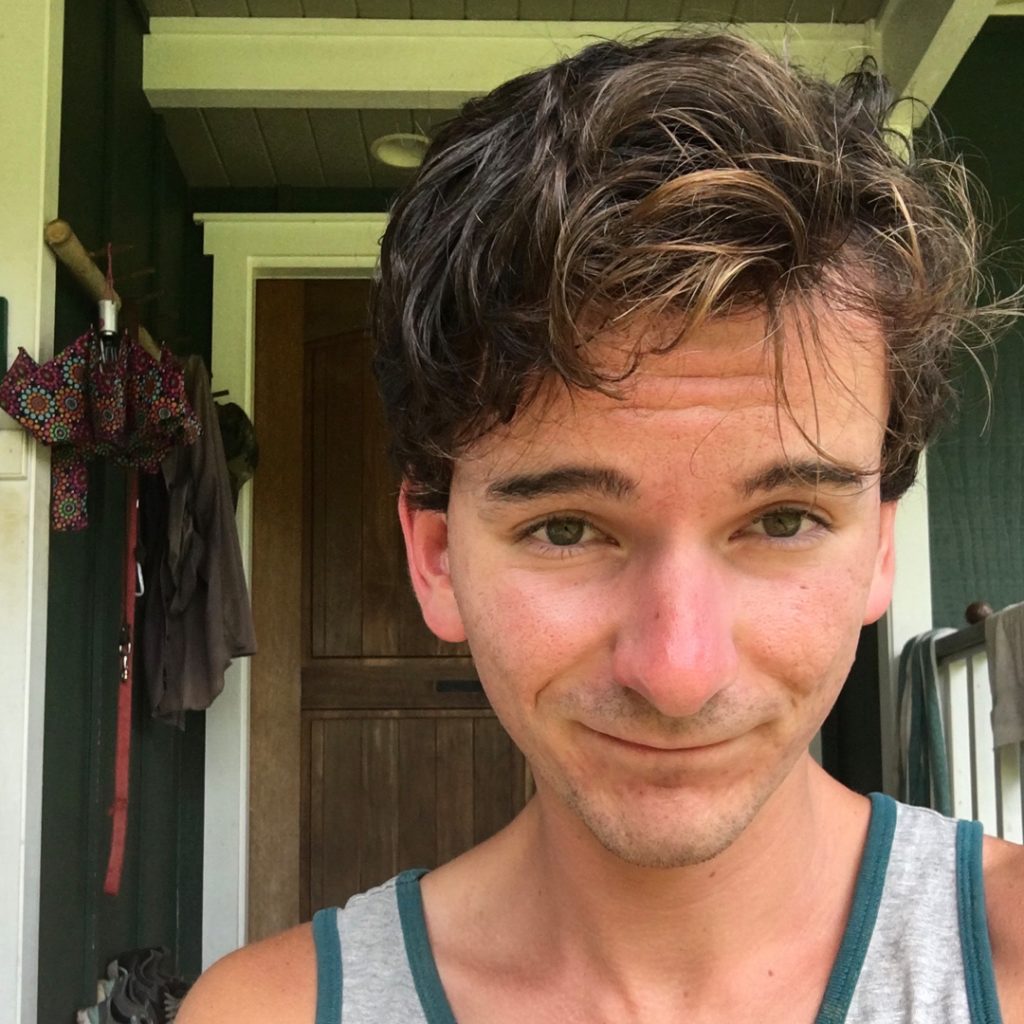 How do you think your friends and family would describe you?
Ah. Let’s see. Good job, Braden, starting with the hardest question. Way to go. I guess I see myself as a go-getter, a think-outside-the-box-er, a questioner of what the worth really is of thinking outside the box… but does that show? Do people, the people I’m closest to, see me and think, Yes, there’s Braden, the go-getting questioner of box-breaking-thinking? Yes, maybe, maybe, maybe. In general, though, people say I’m quiet. And ambitious, or gentle, if they know me well enough.

Why did you choose to attend UH Hilo?
I didn’t want to attend university. No, sir. I was going to be a stick-your-hands-in-the-air-and-do-what-you-want famous-before-the-age-of-twenty writer who didn’t have anything to do with that. I would be Ray Bradbury. Cormac McCarthy. Both. I was afraid that if I went to university, my spirits would be dampened, my ambitions hit over the head until they were square and breathless, like frogs corralled into an aquarium. Can you see them pawing at the glass? I could. I wanted to show the world that Braden Savage could make it on his own – that I was self-made, homeschooled, writer-since-the-age-of-seven, and didn’t need any instruction to lead me to success.

My sister, who was attending UH Hilo at the time, took a creative writing class and came home with the news of writing contests and a creative writing certificate. I mumbled and grumbled and griped and moaned, and eventually, after justifying to myself so many times that I already knew what I was doing, that I would just be going in for one year to improve the skills I already had, I signed up as a student at UH Hilo. I took all the classes I needed to earn my creative writing certificate within the first year, then I stood at the brink of summer, blinking like something that had emerged from a cave after too long smudging around for bugs. I had taken the classes, sure, and I had earned the certificate… but what was that inside of me? Yes, I still believed my conviction from before, that I was improving skills I already had – building up who I wanted to become in order to pursue my passion – but it had been so much different from the in-and-out, here-are-the-classes, take-them, finish-them, thank-you-very-much entrance and exit that I had expected. I had met beautiful people and had been taught beautiful things that I had never known before. I had faced what I didn’t know with terror, then acceptance, then excitement, and as I teetered on the summer, gulping back the warm embers of the last year, I started to feel as though I couldn’t go without it. The social atmosphere, the environment of learning, the clubs, the late nights sitting out on the benches in front of the library, chatting with friends I hadn’t known four months earlier… it had become a part of me. Just as much as the drive to pursue my passion.

What is a typical day like for you?
Is “typical” how walking through the garage in the dark somehow feels more important than walking through it when it’s light? Sitting beside a river in Colorado and thinking, just because it’s my birthday, maybe I’ll meet my future wife in the restaurant we’re going to that night? Leaving UH Hilo’s theater at night after standing in a circle of my closest friends and screaming at nothing just to dispel the energy we’re holding? Standing on a beach and watching how long it takes a footprint to be erased? Chilling on the third-floor lanai of Campus Center at night and watching the campus patched with mellow orange light like cooling metal? These moments happen often, and some of them might not happen again, but I don’t think in either case they’re typical. They’re like rubber balls in constant motion. This day, I scream in the circle. Flip. This day, I hardly make a noise.

How does UH Hilo connect learning, life and aloha?
I’d just finished my first semester at UH Hilo, and I was talking to some visiting family members over winter break 2018. The conversation turned to my course-load for the Spring semester, and when they heard that I was taking four writing-intensive classes at once, there was a bit of a draw-in-the-breath, nervous-chuckle, If-you-really-think-you-can-do-it undertone in how they responded. I was fine with it, just fine… Really.

Over the next few weeks of these reactions repeating, however, I started to think: Will it be fine? I began to imagine the opposite of my smooth-sailing first semester: I would flip and flop through a few weeks of the Spring, then I would start forgetting to do certain assignments, then I would have to drop out and work at Wal-Mart for the rest of my life. My mind wrung its fingers over and over during the first week of class… How many presentations do I have to do this semester? I have to do a public reading? And TEACH A CLASS? I couldn’t do it. I told my parents I’d taken on too much, that I was going to burn out. They told me to stick with it. I nearly ran off when, on my first day of Playwriting class, we had to stand in front of the class and act. I couldn’t do it. I kept saying it. I couldn’t. I couldn’t.

A few weeks passed. I gave my first presentation, and it was, surprisingly, to a room of friends (or at least acquaintances, by then). I started to draft out the lesson-plan for the class I had to teach, and I discovered that, even though I was the only freshman in that class, everyone else was nervous as well. And this was acknowledged. Stressed over, sure. But also laughed at. Discussed after class like it was the upcoming episode of a show we were following.

Sure, yeah, If-you-think-you-can-do-it helps, but sometimes that’s not all that it takes. I didn’t think that I would end up in UH Hilo’s Drama Club at the end of the semester when, unexpectedly, I realized I enjoyed acting in Playwriting. I didn’t think I would end up sitting at a table in the UH Hilo cafeteria, having a sandwich with an author from Wyoming whose book I’d picked up only a few months earlier (or that we would remain correspondents afterwards). I didn’t think that, at the end of that supposedly insurmountable semester, I would feel a sense of loss, similar to when my best friend moved away when I was eleven. Wait, but you’re leaving already? That’s right.

There’s so much more to the university experience than the work that you do. It might look scary at first – Oh, lord, how’m I gonna that? – but keep in mind that the small human moments aren’t written into the course descriptions. Oh, look, now I’m in class with a group of fellow writers. Oh, look, now we’re all upstairs in my office, laughing and sharing a box of homemade cookies. I wonder what’ll happen next.

What are your favorite memories at UH Hilo?
It makes you feel so important to have a headset on and a green-blinking monitor strapped to your hip as you run backstage in the theater, moving from stage right to stage left like a busy ghost. Then, you hand a prop to an actor, or you push a platform onto the stage.

You settle into a chair in the English Department hallway, and it’s nothing spectacular, really – a chair you could find anywhere – but it feels like an armchair at a family-member’s house, especially when the whole faculty is gathered there for a potluck and is seated around you, pulling you into the conversation like you were indistinguishable from the rest of them.

The first time you open up the magazine you’ve put a year’s work into compiling, the crinkle-spread of the pages sounds like seed-pods exploding in the summer. The stories and pictures you spent nights and days scrutinizing over, now preserved on the glossy pages, look like pleasant bugs sealed under amber. And finally, when you set those issues out on the stands, they sit like eager pups in a shop window, waiting to see what owners will come to claim them.

Oh, there’s also that time when you direct one of your own plays, and you stand behind the stage, listening as much to the audience as to the actors.

Or that time when no one can stop laughing in your writing group, and Professor Panek has to read the page that you’re all stuck on, and the way he reads it makes it somehow even funnier.

Or how about the time…