As the podcast developed, the production team began noting words 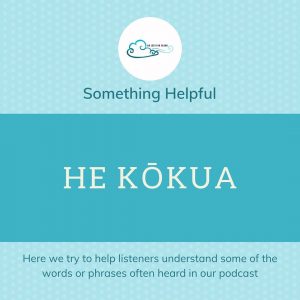 and phrases that listeners might often hear and shared these on Facebook and Instagram. Here is a glossary of those words – “something helpful” to assist you in navigating both the podcast and the island!

A note: The kaʻi (article) “ka” or “ke” before each term in He Kōkua roughly translates as “the” in English. These kaʻi are often included before the word when teaching vocabulary in ʻōlelo Hawaiʻi to help the learner memorize them successfully. The kaʻi “ke” precedes words that start with K, E, A, or O, with “ka” preceding words starting with other letters. There are exceptions to this rule that can’t be predicted and it is therefore helpful to learn the kaʻi with new vocabulary. Also, these kaʻi are used in ʻōlelo Hawaiʻi in situations that English would normally drop articles, such as when referring to non-specific items in general.

Ka  ʻĀkau (ah ka oo) – north (when one faces west, the direction of the sun’s course, the right hand is in the north)

Ka Hema (heh ma) – south (when one faces west, the direction of the sun’s course, the left hand is to the south)

Ka Hikina (he kee nah) – east, the place of the sun’s rising

Ma Kai (mah ka eee) – towards the sea, and is used when heading towards sea

Ma Uka (mah ooh kah) – towards the uplands, and is used when heading inland or away from the sea

Ka Haku – to compose, invent, put in order, arrange; to braid, as a lei, or plait, as feathers

Ka Hili – to braid or plait, as a lei or candlenuts; a braid, plaiting, sting. See lei hili

Ke Kui – to string pierced objects, as flowers in a lei, or fish; to thread, as beads

Ka Lei – lei, garland, wreath; necklace of flowers, leaves, shells, ivory, feathers, or paper, given as a symbol of affection

Ka Leihulu – wreath made of feathers. A lei or wreath for the neck made of the feathers of the bird mamo; ka lei mamo no Laa

Ka Wili – to wind, twist, writhe, crank, turn, screw, drill, bore; to dial, crank, or ring up, as on the telephone

Ka Hula – the hula, a hula dancer; to dance the hula

Ke Oli – chant that was not danced to, especially with prolonged phrases chanted in one breath, often with a trill (ʻiʻi) at the end of each phrase; to chant thus

Ka ʻŪniki – graduation exercises, as for hula, lua fighting, and other ancient arts

Ke Kūʻula – any stone god used to attract fish, whether tiny or enormous, carved or natural, named for the god of fishermen; heiau near the sea for worship of fish gods; hut where fish gear was kept with kūʻula images so that gear might be impregnated with kūʻula mana, usually inland and very taboo. Lit., red

Ka Limu – general name for all kinds of plants living under water, both fresh and salt, also algae growing in any damp place in the air, as on the ground, on rocks, and on other plants; also mosses, liverworts, lichens. See saying, hailepo. Ua ulu ka limu, the seaweed (pubic hairs) are growing. (PPN limu.)

Ka Mākāhā – sluice gate, as of a fish pond; entrance to or egress from an enclosure

Ke Koʻa – fishing grounds, usually identified by lining up with marks on shore.

Ke Konohiki – headman of an ahupuaʻa land division under the chief; land or fishing rights under control of the konohiki; such rights are sometimes called konohiki rights.

Ka Palu – fish bait made from vegetables such as ʻulu, kalo, pumpkin and others.

Ka Pono – correct or proper procedure, true condition or nature, correct, necessary (this is not a full list).

Ke Kaulana Mahina – the position of the moon

Ka Moʻoʻōlelo (moh-oh leh hoh) – a continuous or connected narrative of events; a history; a tradition

Ka Maiʻa (ma ee-ah) – all kinds of bananas and plantains

Ka Pāpale – hat, head covering; to put on a hat, wear a hat

We encourage you to explore organizations mentioned in the podcast, in the bio information of our mea kipa, and listed below. You may find wonderful volunteer opportunities!