According to a survey conducted by the college’s Department of Student Services, more than a third of the graduates who found work so far accepted jobs that allow them to stay in Hawaiʻi.

The University of Hawaiʻi at Hilo College of Pharmacy announced this week that recent graduates of the program have been hired for jobs that require a PharmD degree in 16 states as well as Guam and Washington D.C. at various retail chains, community pharmacies and hospitals. According to a survey conducted by the college’s Department of Student Services, more than a third of the graduates who found work so far accepted jobs that allow them to stay in Hawaiʻi.

Upon their graduation in May 2011, 66 percent of the recent graduates reported that they have obtained a job or were working in a paid residency. The average salary for graduates working full-time but not in a residency program is $117,000.

“These numbers show the breadth of impact our inaugural graduates are already making since graduating just three months ago,” Dean John Pezzuto said. “Their remarkable success at securing jobs before taking the exam for licensure confirms that theses new pharmacists have hit the ground running and will continue to make us proud.”

With a 95 percent response rate, 80 out of 84 graduating PharmDs responded to the Graduating Student Surveys. They answered questions about what they will be doing after graduation and were asked how they thought CoP did in preparing them for a career in pharmacy.

The graduates also are working in several highly competitive pharmacy residency positions throughout the nation in order to gain intensive training in health care settings. Residencies are often a requirement for employment in hospital pharmacy practice or as a faculty member at a pharmacy school. Locations include the Phoenix Indian Medical Center and the Banner Baywood Medical Center and Heart Hospital in Arizona, UH Hilo College of Pharmacy, Intermountain Healthcare in Utah, and Palos Community Hospital and Edward Hines Jr. VA Hospital in Illinois.

“The Sciences and Technology Building will attract scholarly teachers and researchers, which will encourage public and private agencies to partner with us to develop joint research and educational initiatives.” -Chancellor Donald Straney

A blessing and dedication was held today for the University of Hawaiʻi at Hilo new Sciences and Technology Building.

“This facility will complement the Big Island’s living, learning laboratory by significantly enhancing student learning, teaching and research,” said Chancellor Donald Straney. “It will also attract scholarly teachers and researchers, which will encourage public and private agencies to partner with us to develop joint research and educational initiatives.”

The $25 million building, spans more than 42,000 square feet and fulfills the need for additional classrooms, office space and new state-of-the-art laboratories for UH Hilo’s expanding physics, astronomy and chemistry programs. Key features include an auditorium that seats in excess of 140, along with smaller rooms of 60 and 24 seats.

In addition to the tenant programs, the building’s facilities will accommodate classes in biology, math, geography, history and communication. Based on projections, the building will serve more than 1,700 students in various classroom venues daily.

“This is a game changer for the programs that will take up residence in the new building,” said College of Arts and Sciences Dean Randy Hirokawa. “Their growth helped fuel our enrollment gains dating back to the late 1990s. Now they will have the state-of-the-art classrooms and laboratories they need to not only maintain their level of excellence, but step up to the next level.”

The event was attended by a host of elected state, county and university officials, including Governor Neil Abercrombie and UH President M.R.C. Greenwood. Abercrombie’s appearance marked his first official visit to UH Hilo since being elected governor last year and underscored his support for Science, Technology, Engineering and Math (STEM) education and professional workforce development in Hawaiʻi.

“Governor Abercrombie has made it clear in public statements that he sees the Big Island as one of the state’s key economic engines for the next decade, with UH Hilo playing a leading role,” said University Relations Director Gerald De Mello. “STEM education will be critical to the success of that effort and this building provides us with the cutting edge tools to deliver the quality of learning necessary to meet the challenges of the 21st century.” 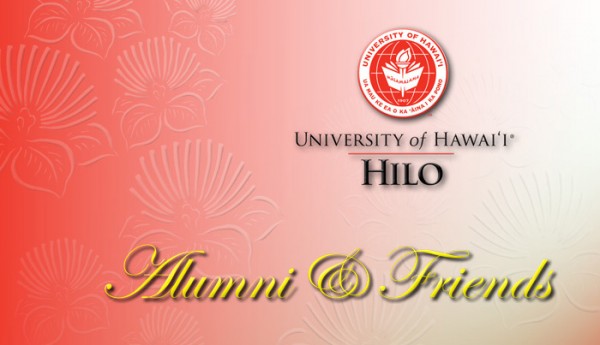 Ever wonder what happened to your classmates from UH Hilo?
Wondering what’s new with your alma mater?

Join us for a talk story session with our new UH Hilo Chancellor Donald Straney.
Reconnect with fellow alumni and hear an update on the latest at UH Hilo.
Enjoy an evening of heavy pūpū and no-host cocktails.

* Limit one adult guest due to limited capacity.

“This is a great example of how the smallest things in an ecosystem really matter. Participation in the beehive program is a down payment on food security.” -Chancellor Straney

Chef Alan Wong has teamed up with University of Hawai‘i at Hilo to build awareness of the critical plight of honey bees and to promote local solutions to sustaining the honey bee industry. You can help by adopting a beehive at UH Hilo and supporting the research and development of healthy beehive practices in Hawaii!

For more info on how you can help out, visit:
http://www.alanwongs.com

HONOKA‘A – Hamakua residents will now receive state outreach services from 38 agencies through a new project located at UH Hilo’s North Hawai‘i Education and Research Center in Honoka‘a. The community gathered on Thursday to celebrate the launch of the new project. The Rural Outreach Services initiative is a partnership between federal, state, county governments, and private non-profit agencies. The wide range of services include, among other issues, job training, health care, housing, and agriculture.

“Rural Outreach Services is an initiative that will turn lives around,” said Rep. Mark Nakashima, a member of the initiative’s coordinating committee, who also sits on the advisory board for NHERC. “Because of the long distances that people need to travel on the Big Island, many residents have not been getting the services they need, whether it is job-related, housing, or even health care.”

The Rural Outreach Services initiative is a public-private partnership of agencies supported by the DLIR Workforce Development Division, University of Hawai‘i at Hilo, Hamakua Partners in Eldercare, Hawai‘i County’s Kapulena Lands project, and the Department of Education’s East and West Hawai’i Community School for Adults.

“We are creating an opportunity to better serve the rural communities of North Hawai‘i, which will be a model for other rural areas across the state,” said DLIR Director Dwight Takamine, also a member of the coordinating committee for Rural Outreach Services. “This is a truly community-driven effort to address barriers to services by empowering rural communities.”

Services will be provided on a first-come, first-served basis, with no appointments necessary.

During the month of July, one agency will be available at the center on Wednesdays and Thursdays. Agency availability will increase beginning August. For more information and a schedule of upcoming services, workshops and conferences, contact the North Hawai‘i Education and Research Center at 775-8890. A calendar of events is posted at: http://goo.gl/fS9T3.

The first workshop on entrepreneurial opportunities will take place at the center on July 27, 2011. It is being provided by Hawai‘i County’s Department of Research and Development and the Small Business Development Center West Hawai‘i and will include one-on-one consultations on-site.

The following agencies are participants in the Rural Outreach Services initiative at UH Hilo’s outreach center in Honoka‘a: