“This is a great example of how the smallest things in an ecosystem really matter. Participation in the beehive program is a down payment on food security.” -Chancellor Straney

Chef Alan Wong has teamed up with University of Hawai‘i at Hilo to build awareness of the critical plight of honey bees and to promote local solutions to sustaining the honey bee industry. You can help by adopting a beehive at UH Hilo and supporting the research and development of healthy beehive practices in Hawaii!

For more info on how you can help out, visit:
http://www.alanwongs.com

HONOKA‘A – Hamakua residents will now receive state outreach services from 38 agencies through a new project located at UH Hilo’s North Hawai‘i Education and Research Center in Honoka‘a. The community gathered on Thursday to celebrate the launch of the new project. The Rural Outreach Services initiative is a partnership between federal, state, county governments, and private non-profit agencies. The wide range of services include, among other issues, job training, health care, housing, and agriculture.

“Rural Outreach Services is an initiative that will turn lives around,” said Rep. Mark Nakashima, a member of the initiative’s coordinating committee, who also sits on the advisory board for NHERC. “Because of the long distances that people need to travel on the Big Island, many residents have not been getting the services they need, whether it is job-related, housing, or even health care.”

The Rural Outreach Services initiative is a public-private partnership of agencies supported by the DLIR Workforce Development Division, University of Hawai‘i at Hilo, Hamakua Partners in Eldercare, Hawai‘i County’s Kapulena Lands project, and the Department of Education’s East and West Hawai’i Community School for Adults.

“We are creating an opportunity to better serve the rural communities of North Hawai‘i, which will be a model for other rural areas across the state,” said DLIR Director Dwight Takamine, also a member of the coordinating committee for Rural Outreach Services. “This is a truly community-driven effort to address barriers to services by empowering rural communities.”

Services will be provided on a first-come, first-served basis, with no appointments necessary.

During the month of July, one agency will be available at the center on Wednesdays and Thursdays. Agency availability will increase beginning August. For more information and a schedule of upcoming services, workshops and conferences, contact the North Hawai‘i Education and Research Center at 775-8890. A calendar of events is posted at: http://goo.gl/fS9T3.

The first workshop on entrepreneurial opportunities will take place at the center on July 27, 2011. It is being provided by Hawai‘i County’s Department of Research and Development and the Small Business Development Center West Hawai‘i and will include one-on-one consultations on-site.

The following agencies are participants in the Rural Outreach Services initiative at UH Hilo’s outreach center in Honoka‘a:

The college now becomes the first school of pharmacy in the State of Hawai‘i and the Pacific region to become fully accredited by the prestigious Accreditation Council for Pharmacy Education.

After five years of intensive reviews, the College of Pharmacy at the University of Hawai‘i at Hilo has been granted full accreditation by the national agency that regulates pharmacy schools.

At a meeting this week, the Board of Directors of the Accreditation Council for Pharmacy Education voted to award the college full accreditation for a period of two years. Continuation will be determined at a future ACPE board meeting, following a site visit to assess the ongoing progress of the program.

“Faculty and staff at the College of Pharmacy have worked extremely hard to get to this point,” said UH Hilo Chancellor Donald Straney. “But we all know we can’t stop now. We’re doing everything we can to help improve their chances of becoming one of the top 25 schools of pharmacy in the nation.”

According to John Pezzuto, who was appointed dean of the college in 2006, receiving full accreditation at this time was a close call.

“We are able to provide a first-rate education for our students, but we will not be able to realize our dream of being a top-ranked college of pharmacy until permanent facilities are completed,” he said. “I believe ACPE took a leap of faith in extending full accreditation as a result of strong commitments for our future development. So our work is not nearly done. They will be continuously checking on our progress.”

The college now becomes the first school of pharmacy in the State of Hawai‘i and the Pacific region to become fully accredited by the prestigious agency.

“I am very proud of the university’s accomplishment, having been personally involved in the planning for this college from the beginning,” said U.S. Senator Daniel K. Inouye (D-HI) in a letter to the ACPE board. “Throughout the years since UH Hilo began its quest, I have been consistently and enthusiastically joined in supporting the college by my colleagues in the Hawai‘i congressional delegation.”

“We began the process of accreditation before any students were aware we were here,” Dean Pezzuto said. “That was necessary in order to meet ACPE’s rigorous review process, which has been a constant reminder that what we do and how we do it is worthwhile. Even more importantly, it’s gratifying to know we did not let the students down. All graduates of the college are eligible for professional licensure after passing a national board exam.”

The board granted the college pre-candidate status in June 2007, and each year the college was required to satisfy a review board during a site visit to Hilo that it met 30 standards of excellence. Key points of evaluation include areas such as curriculum and facilities.

ACPE is recognized by the U.S. Department of Education as the national agency for the accreditation of professional degree programs in pharmacy.

Participation in the beehive program is a down payment on food security, says UH Hilo Chancellor Straney.

Chancellor Donald Straney welcomed renowned chef Alan Wong to the University of Hawai‘i at Hilo’s Agriculture Laboratory Farm in Pana‘ewa on Saturday to promote the Adopt-A-Beehive program. The program is a partnership between Wong and UH Hilo to raise awareness of the critical plight of honey bees and to promote local solutions to sustaining the local honey bee industry.

The public is invited to help by adopting a beehive at UH Hilo’s farm lab to support research and development of healthy beehive practices in Hawai‘i. Adopters of hives will receive periodic reports and photos of the assigned bee colony from the UH Hilo student taking care of the hive. Supporters donating $300, $500, or $1,000 also will receive a personal supply of honey and honey products, along with invitations to join Chef Wong at bee-and agriculture-related activities held on campus or at the UH Hilo farm.

“This is a great example of how the smallest things in an ecosystem really matter,” says Chancellor Straney. “Participation in the beehive program is a down payment on food security.”

Learn more from the poster about the Adopt-A-Beehive program: 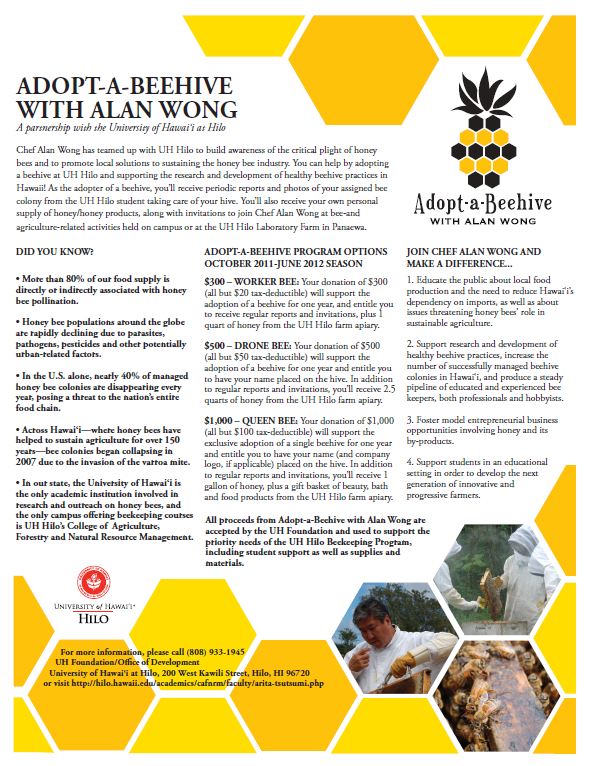 Use this form to send in your support.

More info in the video below.

Under the agreement, the state is proposing to explore the development of a prototype International Lunar Research Park at the University of Hawai‘i at Hilo. The partnership will contribute to the development of education programs and foster economic opportunities including new, high-tech jobs. 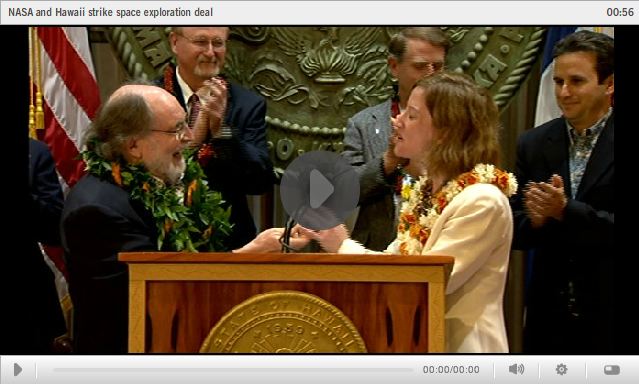 HONOLULU — NASA and the State of Hawai‘i have agreed to collaborate on a wide range of activities to promote America’s human and robotic exploration of space. The partnership also will contribute to the development of education programs and foster economic opportunities including new, high-tech jobs.

Governor Neil Abercrombie and NASA Associate Deputy Administrator Rebecca Keiser signed a two-year agreement, formally called a non-reimbursable Space Act Agreement Annex, during a ceremony yesterday in the Governor’s Office. The ceremony was held on the 50th anniversary of President John F. Kennedy’s historic announcement committing the country to land an American on the moon and return him safely before the end of the decade.

“Hawai‘i has been part of America’s space activities from the beginning of the space program when Apollo astronauts trained in the islands for their historic missions to the moon,” Governor Abercrombie said. “This partnership with NASA will broaden educational and employment opportunities for our local families and bring dollars into our economy.”

Under the agreement, the state is proposing to explore the development of a prototype International Lunar Research Park at the University of Hawai‘i at Hilo. It would use the state’s unique terrain, which is similar to that of the moon and Mars, to enable development and testing of advanced automated and tele-robotic vehicles. Researchers would benefit from Hawai‘i’s natural geography, advanced communications, power generation and other technologies required for space exploration.

“This is the type of participatory exploration involving universities and small- to mid-sized high technology companies that is becoming an increasingly important component of the 21st century space program,” Keiser said. “Americans want to participate directly and personally in space activities. As we have seen from NASA’s Commercial Orbital Transportation Services project and the Centennial Challenges prize competitions, harvesting the country’s innovative talent is important to the success of our future endeavors in space. The space frontier is opening in novel and exciting ways.”

The state will provide the prototype test environment and infrastructure for the proposed analog test facilities. NASA will evaluate new concepts and models for conducting space exploration. The state will explore the potential to develop and mature innovative space-related technologies for educational, industry and government use.

“From NASA’s perspective, this partnership can inspire ideas and applications from analog test sites that can be generalized to space exploration and development of the moon and other planetary bodies,” said Ames Director Pete Worden.

The state’s Office of Aerospace Development will be the lead state agency for the project, enhancing dialogue and coordination among the state, private and academic partners to enable growth and diversification of the state’s aerospace economy.

“We support NASA’s goal to promote public-private partnerships and multinational alliances to help reduce the cost, enhance the feasibility and accelerate the implementation of future space missions – leading to settlements beyond low-Earth orbit,” said Jim Crisafulli, director of Hawai‘i’s Office of Aerospace Development. “Locally, this collaboration should catalyze Hawai‘i-based economic innovation and engage engineers, scientists, educators, and students, as well as commercial entrepreneurs, to increase the opportunities and benefits of space exploration.”