The Hawaiian language came back from the brink of extinction in the early 1980s thanks to a revival program by a small group of educators.

When it started, the number of Native Hawaiian speakers was in the hundreds, now there are thousands.

In January 2014, 300 teachers, school administrators, researchers and delegates representing indigenous languages in 25 of the 50 United States and ten countries came to Hawaiʻi to take part in the 21st annual Stabilizing Indigenous Languages Symposium.

The five-day conference at Haleʻōlelo, the Ka Haka ʻUla O Keʻelikōlani College of Hawaiian Language at the University of Hawaiʻi at Hilo, and the Hilo Hawaiian Hotel showcased how the Hawaiian language was saved and is now flourishing.

“Some of these groups have kept the languages much longer than Hawaiian was kept here in Hawaiʻi and yet we are ahead of them now because of the work that was done in the 1980s trying to start the language again,” said Pila Wilson, one of the symposium organizers and UH Hilo Hawaiian language professor. 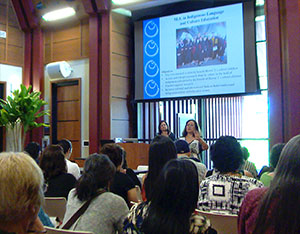 The symposium featured dozens of workshops, panels and presentations focusing on the use of schooling for language revitalization and immersion programs from preschool to doctorate. Among the countries represented were Saudi Arabia, Canada, Chile, Singapore, New Zealand, the Marshall Islands, Japan and Taiwan, where more than a dozen indigenous languages are near extinction.

“Right now we are losing our language because the Chinese dominated our society, the mainstream society, so this is why we come to the conference,” said Hung-Yu Ru a delegate from Taiwan. “We are looking for some way to try and save our language.”

Other groups already have strong language programs and were more interested in issues like government testing, developing curricula, parental involvement and other challenges.

“Our students learn Navajo and they speak Navajo, but once they, with other peers, like in the playground and in the lunch line, they’ll switch back to English,” said Florian Tom Johnson, and administrator from Rough Rock Community School, a Navaho language immersion school in Chinle, Arizona. “We want to know how it is done here to stay in Hawaiian.”

The overall lesson was perhaps the most important for any person or group whose goal is to have their language flourish like Hawaiian does today.

“They’ve learned from us that a small group of people can have a huge impact,” said Wilson.

Published in All Posts Community Gatherings