One of the goals stated in our Draft Strategic Plan is to upgrade University of Hawai‘i at Hilo’s technology infrastructure including computer laboratories and classrooms, wireless broadband across all areas of the campus, and new technologies to better support student learning, teaching effectiveness, and research.

I am pleased to report that over the summer we have been upgrading our wireless system resulting in an overall increase in coverage across the campus to 85%. This includes an increase to wireless coverage in Mookini Library from 40% at the end of last semester to now 100% coverage on all three floors. Speeds of up to 50Mbps per second are capable for library users; this means that students will now be able to download and play videos and multimedia at significantly increased speeds.

Improvements will continue to be made to the campus-wide wireless broadband during the fall semester resulting in upgrades to 300 access points on campus: 62 in the library, 42 in student housing, 40 in the University Classroom Building (UCB), 19 in Kanaka‘ole Hall (already completed), and the remainder will be used for upgrading access points on campus and expanding wireless broadband coverage in areas where it is not adequate. We hope to have the majority of this work completed by the end of September.

We did experience a few teething problems with the campus wireless system, including those in student housing, during the week of registration and first week of classes due to higher than expected usage. The issue is now resolved.

We also are upgrading key physical technology infrastructure. Later this semester in the library, a newly designed student production and presentation room will be available on the third floor. This room will include a 9-foot screen, 4000 lumen HD projector, dual mounted LED monitors, and a Polycom 7500HD telepresence system. This facility will allow students to develop necessary job skills by assisting them in creating, practicing, and presenting class presentations.

Currently in process at the library are technology enhancements to five student group study rooms. The library classroom also is being upgraded with two fixed 70-inch monitors and a Polycom 7500HD telepresence System. This will allow library faculty to facilitate student learning with students from other UH campuses and campuses throughout the world.

Elsewhere on campus, we’ve upgraded two education classrooms with Smart technology and Podcasting systems so students can attend classes remotely. Two classrooms in Athletics used by Kinesiology and Exercise Sciences were upgraded to multimedia smart classrooms. By the end of the fall semester, five Marine Science classes will be upgraded to multimedia smart classrooms. All classrooms in UCB, Kanakaʻole Hall, Sciences and Technology, Athletics, and Marine Science buildings will eventually be equipped with the following standard equipment:
• A multimedia teaching console
• A computer with a screen (computer 1)
• A projector control switch (to change projection source)
• A microscopic imaging capable document camera
• A laptop VGA and audio connections (computer 2)
• A DVD/VHS player (video source)
• An audio amplifier with speakers (MP3 input)
• A 3D ready projector mounted on the ceiling
• A wired or wirelesses microphone
• A clicker base for audience response
• Microsoft office and video software with captioning

All funds to support the technology upgrades and improvements came from a grant of approximately $500,000, and all the work is being done in-house by staff in the Office of Campus Technology and tech staff in the library. We will continue with improvements to our information technology systems in what we see as a continuous process to ensure that our students, faculty and staff have the technical resources they require to succeed.

I would be interested in your comments on either the wireless system, infrastructure upgrades or the Draft Strategic Plan as whole and would encourage you to write to uhhplan@hawaii.edu with any feedback or suggestions you may have.

For more news and information from the Office of the Chancellor, please visit my blog. 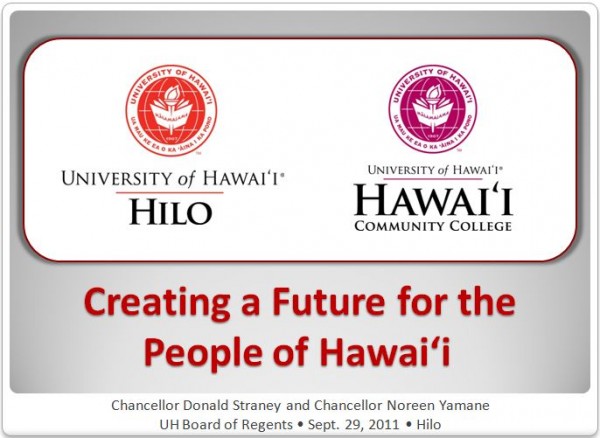 Faculty and staff of University of Hawai‘i at Hilo and Hawai‘i Community College showed off their culinary skills today at the 3rd Annual Best Bowl Cookoff held at UH Hilo’s Student Life Center. Colleagues who attended were the official “tasters” and judges who voted for their favorite dish to determine the Best Bowl on campus.

Shana Kaneshiro from the UH Hilo Financial Aid Office is this year’s Best Bowl Grand Champion. Her winning dish was a delicious Taco Soup, garnished with sour cream and cheese served with tortilla chips. She won a one-year membership to the Student Life Center.

Jodi Kunimoto from the Advising Center won Best Bowl Dessert with her Red and White Delight, a medley of strawberries and cream with macadamia nut topping.

All attendees (cooks and tasters) received a punch card that allows five free visits to the Student Life Center.

Congratulations to this year’s winners!

Top photo of Chancellor Straney by Tim Moore. Other photos by John Oshima.

The University of Hawai‘i will be presenting its proposed tuition schedule for fall 2012 through spring 2017 to the community at open public meetings statewide from Sept. 16 to Oct. 21. The meetings will explain the rationale for the tuition proposal, what increases would be used for, and elicit feedback from the public.

Hilo’s meeting is scheduled for Wednesday, Sept. 28, beginning at 3:30 p.m. at the UH Hilo Campus Center Dining Room. Students, the university community, and the public are invited to present testimony (written and/or oral) on the university’s proposed tuition schedule.

On Oct. 21, there will be an 11:30 a.m tuition proposal meeting broadcast statewide via Hawai‘i Interactive Television System (HITS), which can be attended on campus at UH Hilo’s media services room #359.

The final recommendation on the proposed tuition increase will be presented to the UH Board of Regents for action at a meeting in mid-fall.

The dates, times and locations of the meetings are subject to change. Please visit the UH system website for up-to-date information. A PDF of the presentation to the Board of Regents and the current and proposed tuition schedule can also be found online.

HONOLULU – Higher education and the role and impact of the University of Hawai‘i System as the state’s only public institution of higher education will be the topic of discussion on “INSIGHTS” on PBS Hawai‘i on Thursday, Sept. 8. Joining host Dan Boylan for the hour-long live broadcast at 7:30 p.m. will be UH President M.R.C. Greenwood, UH West O‘ahu Chancellor Gene Awakuni, UH Hilo Chancellor Donald Straney, and UH Mānoa Hawai‘inuiākea School of Hawaiian Knowledge Dean Maenette Benham.

The panelists will share the latest developments at the University of Hawai‘i’s 10 campuses statewide. Discussion will also include the role of the UH System in creating and disseminating knowledge, fostering innovation to help grow the local economy and preparing Hawai‘i’s workforce for the next generation of jobs.

The program airs live at 7:30 p.m. on Sept. 8 and will be rebroadcast on Friday at 9:30 p.m. An audio rebroadcast will play on Sunday morning at 6 a.m. on both KUMU 94.7 FM and KPOI 97.5 FM. Viewers can join the discussion by calling in during the live broadcast to 973-1000 on O‘ahu or 1-800-238-4847 from the neighbor islands, emailing questions to insights@pbshawaii.org, or follow the discussion on Twitter and send comments to @pbshawaii. For more information visit www.pbshawaii.org.