Megan Araujo and Michael Brigoli, UH Hilo Biology Alumni, have been recently accepted into John A. Burns School of Medicine (U of Hawaiʻi). Both will begin their pathway to medicine in Fall 2015. Megan graduated with a 4.0 GPA and received a BS in Biology this past Fall (2014). Mike was a returning student that put aside his firefighter career to achieve his life long go of becoming a physician. Congratulations to both of you!

Brandi is an undergraduate senior Biology student that has been working in Dr. Jon Awaya‘s lab for the past year. She attended the Biomedical Sciences and Health Disparities Symposium on April 17 at UH Mānoa and received 1st prize in the Undergraduate Student Division. Her research is titled, “Characterization of a Novel Microbe in Iotrochota protea via Secondary Metabolite Production and Antimicrobial Activity”. Brandi will be graduating this Spring and attending Cell and Molecular Biology Graduate program this Fall. Chris Yakym, a TCBES graduate student, received 1st prize in the MS category at the annual American Society of Microbiology Hawaiʻi Chapter symposium on April 25th on Oʻahu. His research is titled, “Microbial Diversity Associated with Two Hawaiian Drosophila, D. sproati and D. ochracea,and their Host Plants,Cheirodendrontrigynum and Freycinetia arborea“. 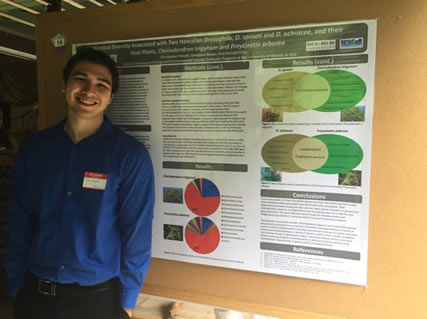 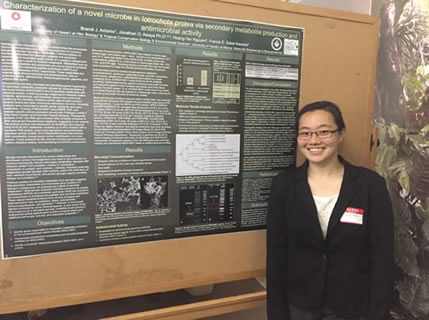 Prof. Stan Nakanishi publishes findings on the use of Cannabinoids agonist and its effects on learning and memory after a traumatic brain injury

Traumatic brain injury (TBI) can often lead to long-term deficits in cognitive functions including learning and memory. There are several post-TBI processes that may contribute to learning and memory deficits, but there is currently no clinical treatment to inhibit these pathological processes. Other studies have suggested that activation of the cannabinoid 1 receptor (CB1R) may inhibit aspects of post-TBI pathology; so we applied a synthetic CB1R agonist to young adult male rats after administering a controlled TBI and then tested their learning and memory behavior. We found that administering a CB1R agonist after a TBI appears to rescue their learning and memory functions. Further research is necessary to better understand the potential use of cannabinoids in clinical practice.

With help from UH faculty, as well as students in the Advanced Ecology and Evolution Course (BIOL 481), a unique tract of low-elevation wet forest near UH Hilo was recently put into conservation through an easement to the Nature Conservancy.

In January 2015, the Honolulu Star Advertiser published the article “Humpback Love: The whale’s courtship and mating rituals remain a mystery after 35 years of research. The story featured the quotes from several researchers in Hawaiʻi including Adam Pack.

Dr. Li Tao received his Ph.D. in Biochemistry and Molecular Biology at the University of California at Davis in 2007. He then worked as a Project Scientist at UC Santa Cruz conducting research on the molecular mechanisms involved in the timing and positioning of the cytokinesis furrow during cell division.

The varieties of ‘Ohi’a on Hawaiʻi Island are real

The Stacy Lab published their research on Incipient radiation within the dominant Hawaiian tree Metrosideros polymorpha in Heredity. This study provides evidence for the evolutionary significance of four of the five named varieties of this species on Hawaiʻi Island and indicates that Hawaiian Metrosideros should be useful for studies of divergence and the evolution of reproductive isolating barriers at the early stages of speciation in trees.

In its May-June 2014 issue, Australian Geographic Magazine published a story on humpback whales including an interview with Adam Pack about his research findings on the relation of whale size to behavior in Hawaiʻi. Research led by Dr. Yohan Pillon in the Stacy Lab reveals a cryptic adaptive radiation of trees in New Caledonia. This study of the nickel(Ni)-hyperaccumulating tree genus Geissois suggests that variation in biochemical strategies for coping with both typical and adverse soil conditions may help to explain the diversification and coexistence of tropical forest trees on similar soil types.