In August 2017, Adam Pack was an invited keynote speaker at the 2nd World Congress on Humpback Whales in Reunion Island.  Dr. Pack‘s presentation was entitled ” Twenty years of sizing whales underwater: Insights into the behavioral ecology and mating system of humpback whales in the Hawaiian breeding grounds” Adam Pack was awarded the University of Hawaii Board of Regents Excellence in Teaching Medal.  The award is a tribute to faculty members who exhibit extraordinary levels of subject mastery and scholarship, teaching effectiveness, and creativity and personal values that benefit students. Based on the recommendations of faculty, Kayuri Kadoya has won the Outstanding Graduating Senior Award for her excellence in academia and for her research at the College of Pharmacy. The Don Hemmes Award, which pays for one year of tuition, has been awarded to Kenton Wandasan who has also achieved high marks throughout his academic career. Congratulations to Kayuri and Kenton! 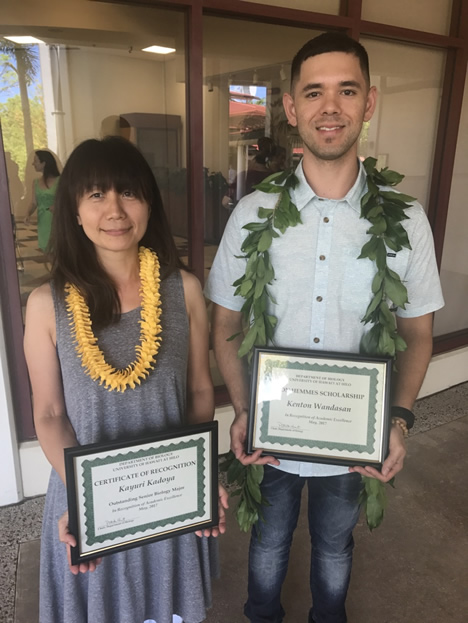 Zachary Geisterfer is a UH Hilo senior, majoring in the Cellular and Molecular Biology track.  Presently, he conducts research in Dr. Li Tao’s laboratory studying the structure and function of centralspindlin, a kinesin complex that organizes the central spindle by bundling microtubules.  Previous microtubule bundling assays did not include ATP, or used a non-hydrolysable ATP analog, which could generate artificial results. In his publication, “In vitro Microtubule Bundling Assay under Physiological Conditions“, Zach and his colleagues describe a new technique to overcome the problems above and thus accurately measure the bundling activities (http://www.bio-protocol.org/e2217). Zach has been accepted to the Ph.D. program at the University of Wyoming.

Albert Shim is a senior majoring in Chemistry in the Health Sciences track. Albert joined Dr. Li’s laboratory two years ago. His research is focused on the regulation of cell division and gliding assays, an important method in studying cytoskeleton and cell division.  As the lead author, Albert’s work, “Gliding Assay to Analyze Microtubule-Based Motor Protein Dynamics” has been published on the latest issue of Bio-Protocol (http://www.bio-protocol.org/e2210).His publication provides the field with the newest updates on gliding assays. Albert has been accepted into the University of Utah School of Dentistry.

Dr. Nakanishi and colleagues developed a collection of specialized techniques to record from live mice in order to study how the nervous system encodes sensory information, processes those signals, and produces movements in living organism, all without anesthetic complications. Briefly, this set of protocols describes the animal surgery techniques that can be used to study sensory-motor integration in live, adult mice whose brain is removed.

Using this preparation, we can better understand how sensory information is collected, integrated, how we produce complex reflex patterns. We can study cardiovascular and respiratory functions, and learn more about the spinal circuits that coordinate the muscle activity for movements and walking.

Read the entire article on Nature.com.

Dr. Jolene Sutton and colleagues make the front page of the Hawai’i Tribune-Herald for their mosquito research

“To protect Hawaiʻi’s unique, imperiled native birds, researchers from the University of Hawaiʻi at Mānoa and UH Hilo are teaming up with the Department of Land and Natural Resources (DLNR) and the U.S. Fish and Wildlife Service to adapt a ‘birth control’ method used across the U.S. mainland to control mosquitoes. The scientists are taking the first steps to adapt a safe, targeted and efficient mosquito control method known as Incompatible Insect Technique to reduce the population of the disease-carrying mosquitoes that harm native birds in Hawaiʻi.”

—A Department of Land and Natural Resources news release 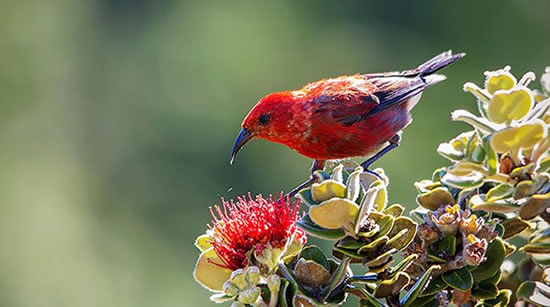 For most avian species, social behavior is critically important for survival and reproductive success. Many social behaviors in birds are culturally transmitted, and as bird populations decline across the globe, important elements of these behaviors may be lost. The Hawaiian crow or ʻalalā, Corvus hawaiiensis, is a socially complex avian species that is currently extinct in the wild.

As in other oscine passerines, vocalizations in the ʻalalā may be culturally transmitted. We compared the vocal repertoire of three of the last four wild ʻalalā pairs from the early 1990s to three current captive pairs at the Keauhou Bird Conservation Center in Volcano, Hawaiʻi to determine how acoustic behavior has been affected by changes in their social and physical environment.

Our results showed that measures of acoustic richness and diversity were similar between the aviary and wild population, however, there were some very notable changes in call rates as well as the types of calls being made. We found that the wild ʻalalā had a significantly higher call rate (calls per minute) than the ʻalalā in the aviaries. There were also repertoire differences which included the loss of alarm and the complete loss of broadcast/territorial calls in aviary ʻalalā. Our results show how socially learned behaviors may change over relatively short periods for an entire species. Understanding how the vocal repertoire and the functional context of vocalizations change may provide useful information for ongoing efforts to reintroduce the ʻalalā into the wild.

Read abstract or the links below to read full article:

Nerves send signals throughout our brain, spinal cord, and body. Some nerves send sensory signals to the brain; other nerves send signals that tell our muscles to contract and produce movements. If nerves in the body are damaged, some of the nerves regrow but the recovery is usually incomplete, leading to problems with sensory or movement functions and even neuropathic pain.

The goal of this project was to learn more about a molecule that is important for the regrowth of damaged nerves. The molecule is called alphaB-crystallin (aBC), and this molecule helps nerves regrow after an injury. We found that aBC affects the recovery and regrowth of sensory and motor nerves, and that we can improve the recovery process by adding extra aBC after a nerve injury.

To asses the repeatability of an ecological study, Assistant Professor Matt Knope recently led a publication that both partially replicates and extends a previous study on the site fidelity (the likelihood of an animal to stay in one “home”) and homing ability of two abundant and ecologically important species of rocky intertidal sculpin fishes on the Oregon Coast. Knope and colleagues report in their new paper in the Journal of Fish Biology that by using a traditional mark and recapture technique in the field, that they find both species have high site fidelity and homing ability to individual tide pools confirming the findings of previous work. However, unlike in the previous study, they find that body size was not a good predictor of homing ability, but that sex was. In addition, their study extends the maximum homing distance of both species, but finds that homing success was negatively related to displacement distance from the “home” tide pools. These findings suggest that adult sculpin populations are likely to be highly sub-structured geographically, possibly contributing to the exceptionally high species richness of the group.

The effects of extinction events are not only caused by the intensity of the taxonomic losses (e.g., the number of species lost at a mass extinction event), but also by the selectivity of the extinction event (e.g., one group of animals being more susceptible to being lost at a mass extinction than another group). Assistant Professor Matt Knope recently co-authored a study in Biology Letters that proposes the use of logistic regression to quantify extinction selectivity, because the selectivity metric is independent of the extinction intensity and multiple predictor variables can be assessed simultaneously. The study uses this statistical technique to illustrate that the end-Permian mass extinction, the largest mass extinction in terms of taxonomic losses in the history of life (~252 million year ago), also had the largest influence on the physiological composition of the fauna. That is, marine animals that had little physiological buffering, or sophistication of their respiratory and circulatory systems (such as polychaete worms, sea cucumbers, and jellyfish), were statistically more likely to go extinct than animals with greater physiological buffering during the end-Permian mass extinction when ocean acidification and anoxia were thought to be widespread. This approach provides an avenue for quantifying the risk posed by the emerging biodiversity crisis that goes beyond simple projection of taxonomic losses.

This study focuses on the biosynthetic pathways of the bacterium and may help to further our understandings of the ecological interactions between the native Hawaiian sponge and its symbiotic microbe.

Dr. Jon Awaya also noted that this research is exciting because it was completely conducted at UH Hilo and by UH students. 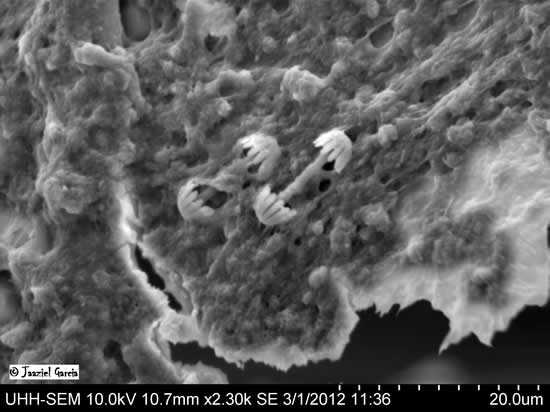