Narrissa Spies, an alumna from the University of Hawai‘i at Hilo, is the inspiration behind artwork created by Laurie Sumiya for the upcoming 2019 SACNAS National Diversity in STEM Conference. The conference is a three-day event to be held Oct. 31 through Nov. 2, 2019, in Honolulu.

Meet the muse for the #2019SACNAS artwork: SACNISTA Narrissa Spies!

Aside from seeing her depicted in this year’s art, Narrissa is also a graduate student in #zoology @UHNews.

Learn more about Narrissa and her research on coral reefs >> https://www.hawaii.edu/news/2018/01/23/a-role-model-who-revels-in-research/ … 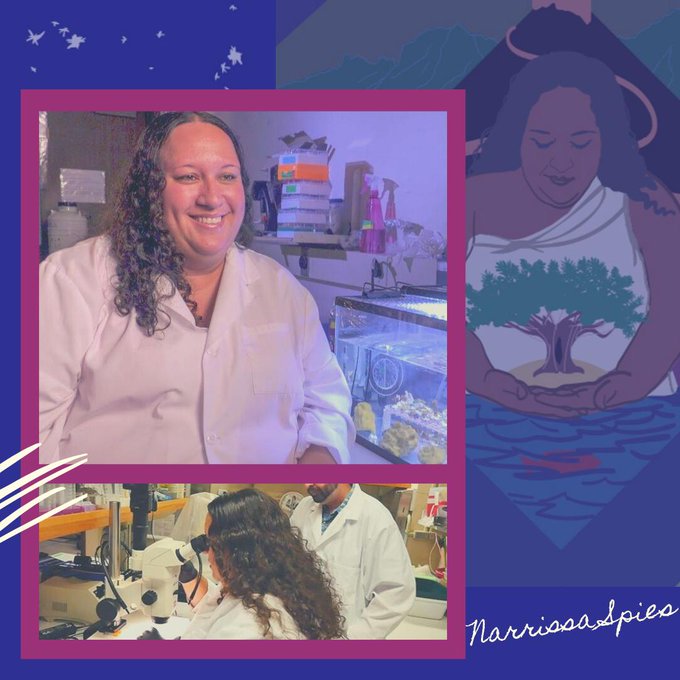 Spies grew up in Hilo and Kawaihae, where her childhood aspiration was to become a medical researcher. She began her studies at Hawai‘i Community College, then graduated from UH Hilo with bachelor of arts degrees in molecular biology and anthropology and a master degree in tropical conservation biology and environmental science. She received her doctor of philosophy in zoology from UH Mānoa. She is now a fish and wildlife biologist with the U.S. Fish and Wildlife Service. 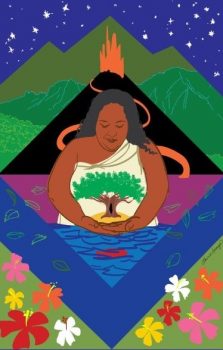 The piece, titled after a traditional Hawaiian proverb meaning “A heavenly nature; an earthly nature” depicts Haumea, Hawaiian Earth Mother and Creation Goddess (ancestor to all indigenous Hawaiians) and modeled after Native Hawaiian scientist and SACNAS member Narrissa Spies. In her hands, she carries the Makalai tree, a tree of life. Behind Haumea is an active volcano (representing creation), verdant green mountains, and the Scorpio and Pleiades constellations (representing the ancestors). Below her, swims a red fish (representing nourishment), an iwa bird (representing travel and clear direction), and colorful hibiscus flowers (representing the diversity and beauty of Hawaiian people and native flora). As a whole, the artwork depicts the creation story — a tale of who we are and how we got here.

The upcoming conference is the largest multidisciplinary and multicultural STEM diversity event in the country. The three-day event focuses on empowering participants for their academic and professional STEM paths. Participants are inspired by scientific research and professional development sessions, motivational keynote speakers, an expo hall, and multicultural celebrations. “At 2019 SACNAS, you can shape your own STEM story inspired by your ancestors, mentors, and peers—nourished by diversity and fueled by passion for discovery,” notes the website about the event.

To learn more about Spies and her research while at UH, see UH Hilo alumna Narrissa Spies: A role model who revels in research (UH Hilo Stories, Jan. 24, 2018).

Megan Araujo and Michael Brigoli, UH Hilo Biology Alumni, have been recently accepted into John A. Burns School of Medicine (U of Hawaiʻi). Both will begin their pathway to medicine in Fall 2015. Megan graduated with a 4.0 GPA and received a BS in Biology this past Fall (2014). Mike was a returning student that put aside his firefighter career to achieve his life long go of becoming a physician. Congratulations to both of you!