The world of Oceania is not small; it is huge and growing bigger every day. Epeli Hau‘ofa, "Our Sea of Islands."

The National Science Foundation's (NSF) Louis Stokes Alliances for Minority Participation (LSAMP) program was mandated by Congress in 1991 and was designed to facilitate historically underrepresented students pursuing baccalaureate and graduate degrees in the fields of science, technology, engineering, and math (STEM). Today, there are 40 LSAMP Alliances across the United States with more than 500 participating institutions throughout the country. The Islands of Opportunity–LSAMP (IOA–LSAMP) represents the only LSAMP Alliance serving the US-affiliated Pacific region. 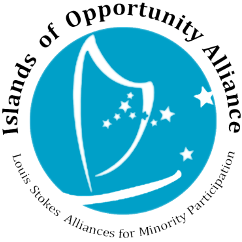 On July 31, 2021, IOA-LSAMP Environmental/Marine Studies student Adrian Ililau of Palau Community College competed in the 100m sprint race at the Tokyo Summer Olympics, achieving a personal best time of 11.43. Afterwards he stated, “It was a tough race, and I’m just glad I got this Olympic experience making this my Olympic debut. I’m glad to be running alongside all these great athletes” (Pacific Daily News). IOA-LSAMP recognizes with pride Adrian's accomplishment on the track as well as in the STEM lab. Just before competing in the Olympics Adrian completed the Internship and Field Studies Program at the Palau International Coral Reef Center (PICRC). The research he produced during his internship is included in the 2021 IOA-LSAMP Student Conference.

IOA-LSAMP sends a hearty congratulations to Adrian, his mentors Victor Nestor and Vernice Yuzi, and our Palau Community College partner!

In October 2020 IOA-LSAMP and Chaminade University launched an IOA-wide online data analytics proficiency course. IOA students from Hawaiʻi and the broader Pacific participated. The Data Camp was designed to introduce students to data analytics and to start the process of upskilling or reskilling participants through a set of curated hands-on, mentored learning modules. For more on this exciting story, go to "Inaugural online DataCamp launches first Pacific-wide STEM learning community"